"They" Have No Interest In Preventing Cancer, They Want the Drug Profits, Nuclear Cartel Kills Again 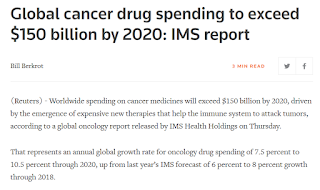 In 6 years, going on 7 years, the results of Fukushima are showing up.

2 years in a row, American life span went down
Record levels of cancer
Record profits on cancer drugs
No end in sight

That’s more than 10 percent up from 2013, and a significant increase from $75 billion five years ago, announced a report published Tuesday by the IMS Institute for Healthcare Informatics. Targeted treatments, which target specific drivers of cancer, now claim almost half of total spending, IMS announced.

Funded Studies on How To Prevent Cancer :  $0.00 Global Budget

and they are pushing more and more drugs

IMS, which provides prescription drug use data for the pharmaceutical industry, said it found 586 cancer treatments from 511 companies were in mid- to late-stage development.