Educational System Being Used For Not Just Indoctrination, But For Extinction of Basic Human Rights

let me explain the Headline: 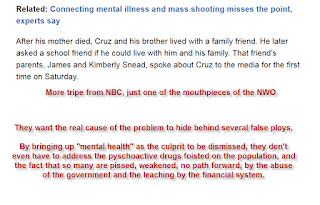 Schools have all become training centers for the acceptance of the New World Order, one government control of everything that matters.    Some picture this as a liberal brainwashing, and in part it is, but it runs deeper.    The super rich, many are sociopaths that demand complete control over the world, and don't ever anyone dare question their status...have co-opted the "liberal cause" to a great extent to adopt their own policies of ultimate control.

Decades have been spent trying to degrade the middle class and moral values.

By bringing up "mental health" as the culprit to be dismissed, they don't even have to address the psychoactive drugs foisted on the population, and the fact that so many are pissed, weakened, no path forward, by the abuse of the government and the leaching by the financial system. 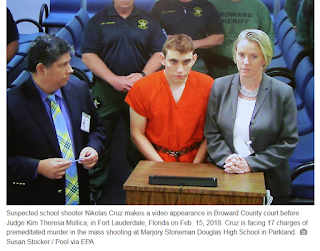 So after decades of indoctrination of students, what better way to have the indoctrinated rise up than by mass murdereing groups of them, so they can bleat for "take away the guns"

Just an aside, but isn't it interesting how everyone except the defendant is grossly overweight, even obese?

NBC now pretends that "Students are Seizing Control of The Gun Debate" https://www.nbcnews.com/news/us-news/students-seize-control-gun-debate-plan-walkouts-march-n849226