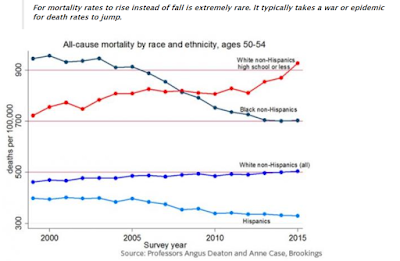 The link is barely touches the surface. Though sources are still in the shadows, evidence will out that the opioid crisis is tied to Pakistani-Afghani vendetta culture. It’s payback - reprisal - for decades of pillage by US forces. Rouge officials on both sides, using the color of law, move heroin and pain-med pharmaceuticals [oxy or fentanyl] into US markets. Apparently, a nexus of CIA/FBI and deep staters have arranged contracts between the VA [+mil health units] and pharmaceutical companies in Pakistan. The poppy crop is huge and under US control - mostly. US elites get a cut of the action while paying Paki warlords with weapons on the back-haul. The ‘war’ is a profit center with multiple partners. Using hacked ID data, active and retired US mil are being targeted at home or as patients in hospitals or pain clinics. The drug crisis is compounded by poor nutrition [GMO’s] and the effects of radiation from Fukushima. Anticipate mass overdosing incidents. Labeled ‘deplorables’ by Hillary, they are about 25 percent the country [according to her]…and apparently expendable.