After the super El Nino bringing warmth to the Pacific, the ice deniers were having a field day.


Ice "extent" or coverage seems to be the most publicized. But really if we are looking at an energy balance, i.e. are things warming or cooling, then we need to look not just at extent, but also Volume and Temperature of Ice.

You can see the 2018 Volume, the black line, is coming into normalcy range.    Kind of a good sign, but bear in mind any "little ice age" will have the Chemtrail boys rethinking things, and it won't be good.

The aluminum and barium "disposal services" will take a financial hit. 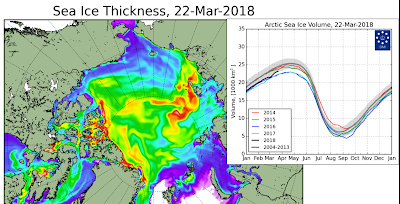 Climate Change is Killing Us.

Or more precisely, your view of climate change is killing us.

The first issue is to understand the words “climate change.” In the recent public discourse, “climate change” has come to mean “blaming humans for changing the climate by using oil and gas and coal.” That creates a major difficulty, because it means that anytime the uninformed see an aspect of climate that either they haven’t seen before or an aspect that is genuinely changed, the underlying assumption is that it must be our own fault and it must be change for the worse.

This view of our climate as primarily anthropomorphic is useful for scaring the populace into submission so you can tax and regulate us to death, but in fact it is the modern-day equivalent of the geocentric view of the universe dating back to Ptolemy.

So, let’s be clear. There is no doubt that the climate is changing. The climate has always changed and always will. The climate will never stay the same – nor should it. The only thing more absurd than denying climate change is thinking that humans can stop it from changing. But when people today say the words “climate change” they mean something else. They mean that humans are to blame.
It is only natural that because we humans tend to incorrectly perceive our- selves as the centre of things we would tend to blame ourselves when the earth’s climate changes. This flaw in human thought is not new.

The Maya, Inca and Aztecs used to do the same thing. In a vain attempt to control the weather and the resulting crop yields, they would engage in human sacrifices including decapitation, blood offerings and live heart extractions. If those efforts didn’t work and the crops failed, then the assumption would be that they didn’t do enough of it – leading to more sacrifices. Today it seems obvious to almost all of us that blood offerings don’t change the weather. I find it strange though that when the sacrificial offerings are from our own treasury, especially if the victims of sacrifice are either corporations or wealthy individuals, you and many other Canadians continue to believe essentially the same thing. And what leaders know is that being the master of the sacrifice concentrates power in those conducting the ritual.

Your government’s view that Canada can stop the global climate from changing by taxing Canadians, killing billions of dollars of new projects and chasing foreign investment away when none of the major global powers are doing the same is profoundly harmful and irresponsible. You have created a graveyard of cancelled mega-projects that are severely damaging to Canada but that strongly benefit other nations for no good reason. The Energy East cancella- tion resulting from the NEB including ‘climate change’ considerations in its evaluation of that project is the latest serious casualty. Insanity! You should be ashamed that we will now unnecessarily import oil from dictatorships when we could be building a stronger Canada.

Just 18,000 years ago almost all of Canada sat under giant thick sheets of ice. Both the Cordilleran and Laurentide Ice Sheets were continuous sheets thousands of kilometres across and several kilometres thick. They melted entirely without human intervention (as did their equivalents in Asia and Europe). They melted so quickly that the rocks upon which they rested (including the Canadian Precambrian Shield) are still rebounding from the rapid removal of their incredible weight. Sea levels have risen over 100 metres during that period separating Alaska from Russia and modifying ocean cur- rents around the globe. The changes we are observing and living through at present are simply the tail end of that monumental transformation and are absolutely in keeping with natural climate change.

Imagine the energy required to melt several continental ice sheets thousands of kilometres across and several kilometres thick, thereby raising the sea level by over 100 metres in just a few thousand years – a blink of an eye in geological time just on the edge of recorded human history. Let the fact that humans had nothing to do with that sink in, and then ask yourself how taxing Canadians and issuing government subsidies to install windmills and solar panels will stop that sort of planetary-scale climate change.

Rather than the disaster that you would have us believe has befallen us or will befall us in future, what we have in fact observed is that access to abundant and reliable energy has increased human life spans, reduced famine and suffering and lead to unprecedented levels of prosperity around the globe. Access to secure sources of energy reduces the impact of climate to humans, not the other way around.

It is noteworthy that the two primary products of hydrocarbon combustion are H2O and CO2, which (along with the sun and nutrients from the earth) also happen to be the very building blocks of life on earth. This is because hydro- carbons are themselves the natural product of organic growth and decay. The primary indisputable and measurable impact of increased levels of CO2 on earth is that plants will grow quicker – which is why greenhouses routinely pump CO2 into their greenhouses (to levels 300% higher than current atmos- pheric levels) to accelerate plant growth. CO2 should be celebrated just as water is, not vilified as a ‘pollutant’ – which it clearly is not.

There is no invisible thermometer controlled by taxation and regulation and subsidy that will change the output of the sun or our relationship with the sun. It turns out that the earth and the sun and the universe at large just don’t care that much about humans or our actions. The simple fact of the matter is that we are vastly more affected by the planet than the planet is by us – and one day in the distant future we will simply be another sedimentary layer in the geological record.
However, just as Galileo was persecuted during his time for advancing a heliocentric theory and questioning the geocentric view of the universe, those of us who question this anthropocentric view of climate are now also subject to ridicule and persecution.

This persecution takes shape in the notion that if I deploy scientific knowledge to refute many of the alarmist claims made by those who believe climate change is anthropogenic, then I must be a ‘denier’ – an epithet closely linked to neo-Nazism that would subtly try to link me to that horrible way of thinking.

Statements like “the science is settled” or “97% of scientists agree” are extremely troubling as they are themselves anti-scientific and designed to sup- press the relentless questioning that is essential to the scientific method. Even Neil DeGrasse Tyson’s statement that “the good thing about science is that it’s true whether or not you believe in it” misappropriates the scientific method to declare science as an infallible source of truth rather than a process of finding and discovering truth through questioning and testing. People in your government tend to say things like “Canadians know…” or “We all know…” when it comes to the anthropocentric view of climate change. In fact, we may not know, or we may know the opposite.
Instead, I prefer Albert Einstein’s statement that “The important thing is to never stop questioning” as the ultimate piece of scientific advice.

The anthropocentric view of climate change has confused the masses and under your leadership is causing Canada to make a series of terrible decisions. In subscribing to this ill-conceived view of hydrocarbon energy as a bad thing, Canadians are suffering terrible casualties to your Liberal government’s economic friendly fire.

I have no doubt that you believe you are doing the right thing and that your intentions are good. The road to hell is paved with good intentions and history is full of leaders who destroyed their nations in fits of madness and in pursuit of vanity and folly.

It is high time you considered that you might be wrong. Many of us can already see that you are.