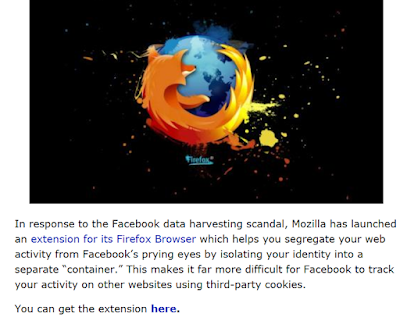 Time to truncate my digital history

I asked Google to provide it's data file on one of my "accounts", aka me.    It took Google several hours to put it together, and now an hour to download 5.23 GBytes.     Seriously.   And that is in a ZIP file.

"Want To Freak Yourself Out?" Here Is All The Personal Data That Facebook/Google Collect


The Cambridge Analytica scandal was never really about Cambridge Analytica.
As we've pointed out, neither Facebook nor Cambridge Analytica have been accused of doing anything explicitly illegal (though one could be forgiven for believing they had, based on the number of lawsuits and official investigations that have been announced).
Instead, the backlash to these revelations - which has been justifiably focused on Facebook - is so severe because the public has been forced to confront for the first time something that many had previously written off as an immutable certainty: That Facebook, Google and the rest of the tech behemoths store reams of personal data, essentially logging everything we do.
In response to demands for more transparency surrounding user data, Facebook and Google are offering users the option to view all of the metadata that Google and Facebook collect.
And as Twitter user Dylan Curran pointed out in a comprehensive twitter thread examining his own data cache, the extent and bulk of the data collected and sorted by both companies is staggering.
Google, Curran said, collected 5.5 gigabytes of data on him - equivalent to some 3 million Microsoft Word documents. Facebook, meanwhile, collected only 600 megabytes - equivalent to roughly 400,000 documents.
Another shocking revelation made by Curran: Even after deleting data like search history and revoking permissions for Google and Facebook applications, Curran still found a comprehensive log of his documents and other files stored on Google drive, his search history, chat logs and other sensitive data about his movements that he had expressly deleted.
What's worse, everything shown is the data cache of one individual. Just imagine how much data these companies hold in total.

Curran, who joked that he's "probably on an FBI watchlist" following his twitter thread, explained that the data he highlighted - while some of it might seem obscure - could have thousands of potentially compromising applications, including blackmailing a rival or spying on a spouse.

The question now is: Will this transparency actually change user's behavior? Or will Facebook's hollow promises to change be enough to lull its legions of users back into a passive ignorance. As Curran points out, people would be outraged if they discovered the government was monitoring them to this extent. But when Google does it? People hardly bat an eye.
Technology Internet
Mobile Application Software
Phones & Handheld Devices - NEC
Social Media & Networking
Posted by Stock at 6:59 PM