Huma Abedin -- Out of the Spot Light -- Then and Now 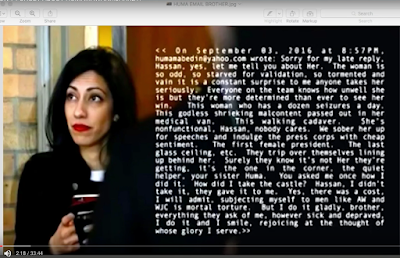 I was going to add this to the prior article on "Globalists Showing Their Hands" but it deserves it own stage.   "Huma" a name strange enough that she can be referred to be first name only, didn't get onto my radar until deep into the election shenanigans, yes the quiet one.

She had a Weiner forced on her and she took it.   Deep down, this "team" is using sex, power, money, and blackmails and control related to sex things.

The globalists and their media assets seem to have OK success in just flipping any accusation against them, and turning the same story against the good guys, no matter how implausible.  The recent "you sue us we sue you" bout was incredulous.  They opened themselves up to discovery, we should expect delays in discovery, whilst they eliminate and redact what is too damaging, as we know they will.

I did an extensive review of over 3000 emails myself and exposed Hillary's deal to buy Fukushima Radioactive Food and feed it to Americans without testing.    That type of review is not easy.   But that review proves that they will eliminate, and redact, even whilst under the eye of a "demand to preserve".

Their game plan seems checkers like, yet we know they can't be that dumb, that one move at a time method.   Jump from crisis to crisis and attempt take power, wealth, control at every step.

Their other main ploy seems to be good enough to keep their followers, following --- ascribe everything that goes against their narrative as some crackpot far right Conspiracy Theory.   Recently
the NYT (disgusting globalist propaganda that it is) attempted to parse the Jihad Martyrs Fund off as a Conspiracy Theory.    Are they that far into their own rabbit hole that they don't know how that will backfire on them?

Or do they have psychological research and feedback via Twitter and Facebook (and NSA data crunch of every story and personal email communication) that supports the effectiveness of such a ruse?   Maybe for their easily lead "troops" aka Sheeples, all they need is to toss out the narrative and meme and their followers eat it up and absorbs it, even whilst reading (or ignoring) the retraction.

Maybe that works, anyway.   How sad.    I feel nearly 100% that good will prevail, at least in this current round, but that is mostly based on intuition, partly on the weakness and poor "chess  strategy" that the globalists employ.   Yet the big money, the deep state backs them, and they are desperate and thus dangerous.


With recent DNC “lawsuit” the desperation becomes more clear.    The globalists are forced to shown their assets in their latest attempt to push their agenda.

The email smells right from the point of view of reality, but seems written “over” the level that Huma would use to her brother who I assume does not have English as primary language.    The use of “validation” seems an odd word for Huma to use much less understand (perhaps I underestimate her) with her brother.

And this unsubstantiated (in my view and no time to deep dive) email purportedly from Huma to her brother. 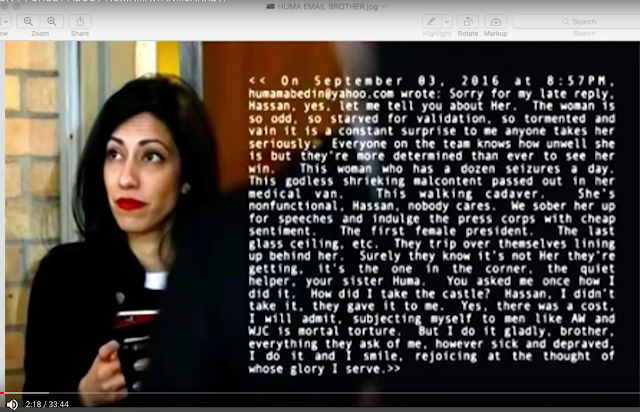