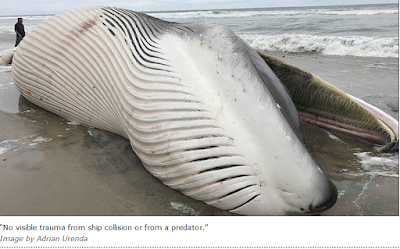 stock here -- first I promise below to tie this dead Fin whale into Kayne West--yes it can be done.
----------------------
We have been talking about the "Slightly Overblown" description of the Death Of The Pacific for many years, predicting it actually.   This article from 2015 is 61 pages of hyperlinks to said demise.


It will be interesting if the "authorities" ever release the cause of death, which clearly wasn't a
ship impact or the like.   A team went to study cause of death, but nothing has been released.


Urenda, like the others present, took photos and videos of the carcass.

“There was a hippie-like woman playing a drum next to the whale’s remains,” he said, “she was performing a ritual.”
The residents that live close by aren’t so amused by the carcass. Many are worried that the rotting scent will travel into their homes and stick on their linens and clothing.
Urenda agrees. “After that I went home and still smelled the stench on me,” he said. “I felt like vomiting.”
Cota used to work for PROFEPA (Procuraduría Federal de Protección al Ambiente), which is the agency in charge of the care and preservation of the environment throughout Mexico.
He said that his contact in PROFEPA and their team of biologists, went to the site on May 21st to do the official investigation of the carcass to determine the cause of death.

KANYE WEST ✔ @kanyewest
the century of self https://www.youtube.com/watch?v=eJ3RzGoQC4s … It’s 4 hours long but you’ll get the gist in the first 20 minutes Basically Sigmund Frued’s nephew Edward Bernays capitalized off of his uncle’s philosophies and created modern day consumerism