Progress Polls -- What Is The Real Thoughts Of The American People? Brennan Kicker

During 2016 election I did multiple polls mostly on my Anti Nuclear website (here) which showed about 80% thinking Trump will win.     This went so far against the MSM fabrications.

Most anti-nuclear, aka environmental people have a liberal bent to them.    Many think that capitalism is the root of all evil.    Many would never think of supporting Trump, the vulgar, "grab 'em by the pussy" guy. 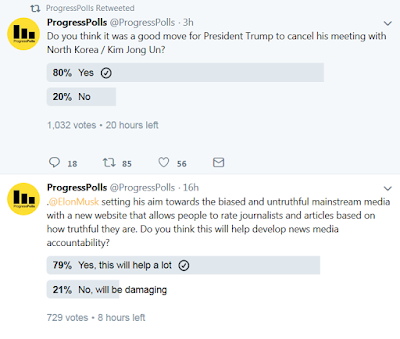 I ran across another site on Twitter with 123,000 followers that puts up polls.   The results seem to
indicate that their readers support much of the things that I do.

Why doesn't the so-called left show up at these sites and promote their views?    Good question, let's leave that open for now.

------------------------------------
Some interesting side shoots arose from digging deeper on their polls, this one from CIA director Brennan, who left in 2017.   Brennan claims that he is "non-partisian" and I guess, maybe that is possible, i guess you could be a "Never Trumper" and hate Trump not based on party lines.   I guess that is possible, some republicans (the establishment, often globalist, ones who see corporate money as more important than the benefit of the American people)

here are some of the "rules of engagement" for CIA activity.
https://assets.documentcloud.org/documents/3416775/DIOG-Redactions-Marked-Redacted.pdf

Here is another version purportedly of the same thing, but looks like a hand scan
https://www.documentcloud.org/documents/3416775-DIOG-Redactions-Marked-Redacted.html

John O. Brennan Retweeted Donald J. Trump
Senator McConnell & Speaker Ryan: If Mr. Trump continues along this disastrous path, you will bear major responsibility for the harm done to our democracy. You do a great disservice to our Nation & the Republican Party if you continue to enable Mr. Trump’s self-serving actions.
John O. Brennan added,

Donald J. TrumpVerified account @realDonaldTrump
I hereby demand, and will do so officially tomorrow, that the Department of Justice look into whether or not the FBI/DOJ infiltrated or surveilled the Trump Campaign for Political Purposes - and if any such demands or requests were made by people within the Obama Administration!

The web's leading multimedia resource on national security law, published in cooperation with the Brookings Institution.

Author - The World As It Is: A Memoir of the Obama White House

Financial Times headlines as they’re published on http://FT.com . For a curated feed of our journalism, follow @financialtimes

Founder, Clinton Foundation and 42nd President of the United States. Follow @clintonfdn for more on my work around the world.

41st President of the United States of America

Former Deputy Director of CIA and Under Secretary of Treasury for Terrorism and Financial Intelligence. Husband. Father of 2 boys. Tweets my own.

Your source for top international news and analysis.

News from The Associated Press, and a taste of the great journalism produced by AP members and customers. Managed 24/7 by these editors: http://apne.ws/APSocial

Where the conversation begins. Follow for breaking news, special reports, RTs of our journalists and more. Visit http://nyti.ms/2FVHq9v  to share news tips.

PBS invites you to discover new ideas and explore new worlds. Join us here for conversation.

All the news and information you need to see, curated by the @ABC News team. Instagram: https://www.instagram.com/abcnews

Your source for original reporting and trusted news.

It’s our job to #GoThere & tell the most difficult stories. Join us! For more breaking news updates follow @CNNBRK & Download our app

The leading source of global news and info for more than 75 years. Snapchat: https://www.snapchat.com/add/nbcnews