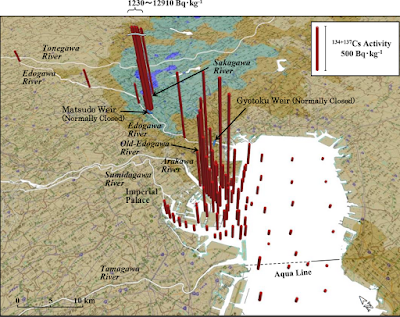 A monitoring survey was conducted from August 2011 to July 2016 of the spatiotemporal
distribution in the 400 km2 area of the northern part of Tokyo Bay and in rivers flowing into it of radiocesium released from the Fukushima Daiichi Nuclear Power Plant (FDNPP) accident.

The average inventory in the river mouth (10 km2) was 131 kBq⋅m-2 and 0.73 kBq⋅m-2 in the central bay (330 km2) as the decay corrected value on March 16, 2011. Most of the radiocesium that flowed into Tokyo Bay originated in the northeastern section of the Tokyo metropolitan area, where the highest precipitation zone of 137Cs in soil was almost the same level as that in Fukushima City, then flowed into and was deposited in the Old-Edogawa River estuary, deep in Tokyo Bay.


The highest precipitation of radiocesium measured in the high contaminated zone was 460 kBq⋅m-2. The inventory in sediment off the estuary of Old-Edogawa was 20.1 kBq⋅m-2 in August 2011 immediately after the accident, but it increased to 104 kBq⋅m-2 in July 2016. However, the radiocesium diffused minimally in sediments in the central area of Tokyo Bay in the five years following the FDNPP accident.

The flux of radiocesium off the estuary decreased slightly immediately after the accident and conformed almost exactly to the values predicted based on its radioactive decay. Contrarily, the inventory of radiocesium in the sediment has increased.

It was estimated that of the 8.33 TBq precipitated from the atmosphere in the catchment regions of the rivers Edogawa and Old-Edogawa, 1.31 TBq migrated through rivers and was deposited in the sediments of the Old-Edogawa estuary by July 2016. Currently, 0.25 TBq⋅yr-1 of radiocesium continues to flow into the deep parts of Tokyo Bay.
Posted by Stock at 3:28 PM