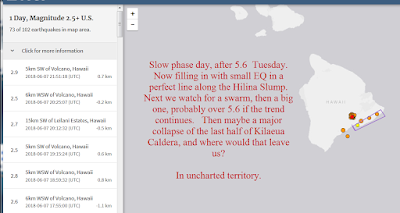 stock here -- just added this USGS chart from today....note how the new, infrequent (1 per hour)
quakes are filling in perfectly along the Hilina Slump, see top image.

Yesterday I emphasized the now clear patterns of swarms of small quakes preceding a big Quake, rather then the small 2.5's releasing energy, and preventing a "big one", they are a great signal to an upcoming "big one"

I also "discovered" something that NO ONE has talked about.    After the initial massive 6.9 EQ just barely off the shore, the 2 subsequent big EQ were not in the volcano but in the deep ocean debris field from the last Slump.   See yesterdays post for that, but it is very significant.

A disturbance of the debris field, can lead to a larger Slump, which in the recent past (1975 for one) 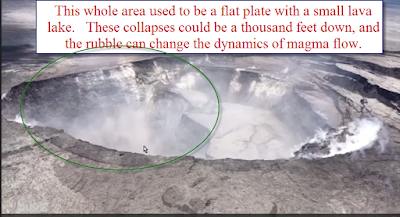 has caused 60' Tsunami, nothing to laugh at.    The Tohoku Earthquake that caused Fukushima was smaller, but admittedly quite a bit wider than these "small slumps".

A Big Slump could cause a Tsunami of 1000', almost hard to picture, and even after hours of research, I found no way to model it's dispersion or land entry penetration depending on location and local bathymetry.