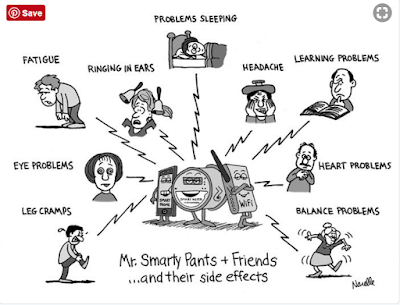 stock here: I have been meaning to broach this subject for over a year. In 2017 I bought an RF /EMF
meter, but have yet to play with it. It is on my list to inventory EMF at my residence, and make adjustments. I have at least 3 wireless sources, maybe more!

And I started eating a cancer repellent diet of sorts. I will do an article on this too, after I know more. But for now even the "literature" and modern medicine supports the idea of particular mushrooms as part of an anti-cancer diet.

Radiation from cellular phones is NOT safe. This is proven beyond debate. However, since people the world are addicted to using cell phones, this quick video will show you a safer way to carry your phone around using the 'airplane mode' option. Always use an 'air tube' head set or speakerphone to get the phone away from your head.

Added from GOM at ENE

You may be interested to note that a local political representative, Tony Law recently wrote to Health Canada requesting information on biological effects from the microwave tower proposed by Telus for communications backup and future cell phone service on Hornby island.

While our trustee’s initiative is commendable, this is like asking a fox with feathers around his muzzle if the chickens are safe.