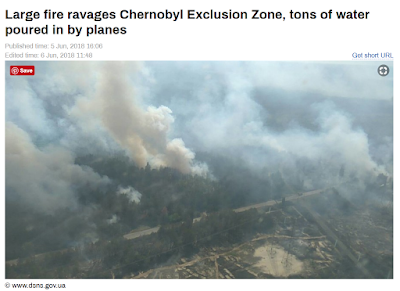 In past years it has been publicized often that the expected decrease in radiation has not occurred at all.   It is about the same as 30 years ago.    This was not expected by the experts, and they expected at least a "half life decrease", along with a dilution decrease.

Somehow that is not happening.   I do not have a strong theory on that, except to guess (not even a
hypothesis at this point) that initially radionuclides were flushed into the upper layers of soil by rains, and down far enough to not register much on a Geiger.    Now they are re-suspended by plant uptake.

We also know that "decomposition" of the forest has been pretty much absent.   I am pretty sure that normal fungi and microbial decomposition would not make the radiation any less, and may actually increase bio-availability for plant uptake.

My Chitin Hypothesis explains much of the reason for lack of forest breakdown.   This also explains the degradation of the Pacific after Fukushima.

A major wildfire is sweeping through the Chernobyl nuclear disaster area. The authorities have deployed dozens of fire trucks as firefighting aircraft bombard the radioactive exclusion zone with massive amounts of water.
The fire inside the Chernobyl 'dead zone,' which is now part of Ukraine, started on Tuesday morning, when dry grass was ignited, local emergency services said in a statement. The wildfire subsequently reached a forest, where up to 10 hectares (24 acres) are now in flames.
Some 29 vehicles and 126 personnel have been dispatched at the scene, with several planes and helicopters dropping water from the sky on the area engulfed by wildfire.
The zone saw another large blaze last year, which scorched 25 hectares (60 acres) of land.