3 Hits on 3 Volcanos, Cities Wiped Out by 2 of the Volcanos.

1) Hawaii 6.9 EQ-- Kilauea small volcano on the flanks of the largest volcano in the world, Mauna Loa took a 6.9 in April

2) Rinjani Volcano in Indonesia, also took a 6.9 with almost 400 deaths.     Rinjani is notable not just because it is close to Krakatoa which many have heard about, but in the last big Rinjani Eruption in 1257 AD, it is likely, that along with "Quiet Sun" (which triggered the Volcano) also then triggered the Little Ice Age which led to famine, disease, and crop failures, and political upheavel. 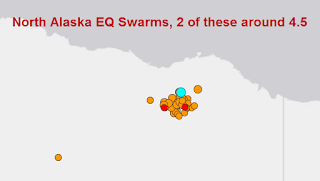 3) Tanaga Volcano (Remote Alaska) took a 6.6 hit, YESTERDAY, and far away in northern Alaska
there have been swarms of earthquakes, in the hundreds, that even the experts are taking note of.

The REAL QUESTION is what's next!?

The start of the Hawaii Volcano came with a 6.9, which destablized the undersea shelf support for that side of the island, with 2 large and rare 4.6 EQ right in the prior "Slump".   This is maybe the biggest news of the century and it is being downplayed by USGS and basically everyone.   No one wants to talk about "the Slump" because if a big chunk of big island slides off, as it has in the past, a 1000' Tsunami could be the result.    Check out this article and search for Slump in the search bar too.

At the time we wrote


Damage reports have yet to come in, but this will likely spur greater fountains and flows.

This flow is already bigger than anything in 200 years, and regular people hear that "things are slowing down".    MSM at it's "best".


I did quiet a bit of coverage on how the sun causes Earthquakes and Volcanos on earth, this link goes to a recent one where I use all modern data and show how sunspots correlate with Moana Loa Eruptions

There is a ton of more EQ articles at Nukepro so have a look and let me know what you think.

There is a lot of unusual terrestrial activity going on during an unusual setting:

My hypothesis is that GCRs "nucleate" volcanic activity by stimulated magma chambers.    The
primary driving force in volcanic eruptions is from phase change of dissolved gases within the magma, into much larger size gases.    Think in the range of 1000 to 1 change in volume.

Bubble nucleation in "the melt" is a known mechanism, and can roughly be described in the shown formula, which is based upon a lot of assumptions, like equal distribution of disssolved gases throughout the melt.     Of course, this formula leaves out what I postulate is a very important driving force for nucleation, GCR's.

The other effect on internal heating of the earth that few have even surmised, and this is my hypothesis, which is so obvious that I don't think it even needs proving---The earth is like a motor (rotor) spinning in a magnetic field.    What happens when a motor spins?   It heats up.   There should also be electric fields generated.
Posted by Stock at 8:42 AM