This is the "official" average monthly world temperature data from the UK
Its called HadCRUT data.   I haven't updated this work since 2014 when I first "discovered" "the Pause" and the truth about the lies of global warming, especially man caused warming.

Click on the blue here for my earlier 2014 work which also shows a bunch more statistics and charts I just don't have time for now.

You can download my spreadsheet with the HadCRUT Data

And to get to the original source data, go here.   But be warned, the data is in a text table that took hours to parse and chart.

We know that similar to NOAA actions, HadCRUT  fudged the data, especially in the lead up to the Paris Climate Conference.   In most cases, the "fudge" was to make earlier data look cooler than it really was, thus making current data "scary", so they could divert Trillions of dollars and control energy at a Global Level.

Will it continue to go down with the "Quiet Sun" nucleating clouds via more Cosmic Rays via less magnetic shield?    I think so. 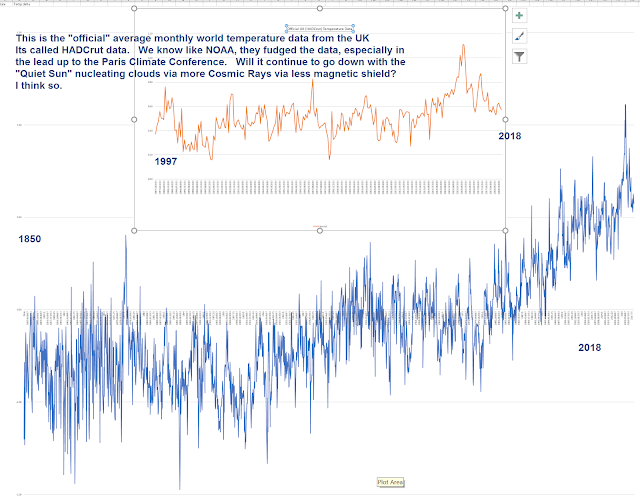