We Were Soldiers Once, And We Still Are If It Comes to It.

I remember back in the day, when it was clearcut known that anyone speaking of a revolution against the United States would know that they were immediately breaking the law and could be prosecuted.    Same with threatening the life the President of the USA.

Now apparently, these are "fair game".   But the law doesn't say so.

Former Military, who are receiving pay/pension, are subject to all the terms of the  Uniform Code of Military Justice.

Article 2 Link to the Source Document is Here 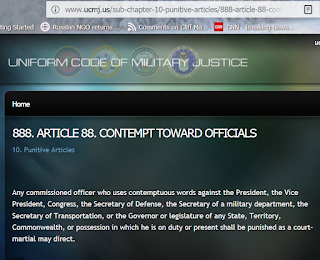 And Article 88 of the UCMJ needs a close read, but it sure appears that it applies.
http://www.ucmj.us/sub-chapter-10-punitive-articles/888-article-88-contempt-toward-officials

So the question is,


1) Why doesn't Trump have a team of lawyers and even former trusted prosecutors examining people and pulling together cases against these kinds of people?

2) Why are they not filing civil suits for slander in cases in which "reporters" are just plain making stuff up, or spinning it so ridiculously and the intent is strictly to damage people's reputations, and ability to get things done?

Personally, I was pretty shocked to learn that many Ex Obama "officials" were allowed to keep their security clearance.   Sure for a few months during transition, would be OK by me.   But after that they have no "need to know".     Rand Paul agrees that all ex officials should be stripped of security clearances.

We were soldiers once and we still are if it comes to it – Jim Walker C Company, 3rd Battalion, 187th Airborne Infantry, 101st Airborne Division – “All the Way Sir!”

In all my years of reading political commentary and writing blogs and comments on twitter and Facebook, I have never read anything so succinctly put and well written involving the traitor Barry Soetoro aka Barack Hussein Obama, as he is known today, now that he is no longer an Indonesian citizen (or is he?), and his sycophant/minions.

Your OPED yesterday, which was picked up by every liberal media outlet in the country, was sadly indicative of the current state of mind of many of our nation’s recently retired and active duty senior military leaders.

You stated that former CIA director John Brennan, “is one of the finest public servants I have ever known. Few Americans have done more to protect this country than John. He is a man of unparalleled integrity, whose honesty and character have never been in question, except by those who don’t know him.”

The man whom you describe as being a cross between George Washington, Abraham Lincoln and Mother Theresa is a deep state hack; who, along with other Obama holdouts, is openly and aggressively pursuing a coup d’état against the current President of the United States, for one reason and one reason only – his side lost the election.

Frankly, I can’t think of any actions that are more un-American, and against the values that Americans hold dear and that which so many Americans died for in the past.
What you call unparalleled integrity, I call honest to goodness treason.

Former CIA director Brennan, whom you state has honesty and character authorized the CIA to spy on American citizens, tried to rig a Presidential election and then lied to Congress about that spying. A man you claim has unparalleled integrity was caught fabricating stories about attacks on US personnel in Libya and providing weapons to ISIS backed militias in Syria.

Former members of the special operations community do not share your adoration for Mr. Brennan. Kris “Tanto” Paronto, a former Army Ranger and private security contractor who was part of the CIA team that fought back during the 2012 Benghazi terror attack, accused Brennan of putting his “politics” before those in the field.

On Twitter, Paronto stated: “My principles are greater than clearances too John Brennan, especially when you and the @CIA Kool-Aid drinkers punishes us for not going along with the Benghazi cover-up story in order to protect you, @HillaryClinton’s & @BarackObama’s failures. You put your politics before us.”

Mr. Brennan was recently referred to by retired Army Brigadier General Anthony Tata as a ‘clear and present danger’ to the nation.

No doubt John Brennan’s complete absence of integrity and his erratic behavior are what convinced the President to revoke his clearance. Mr. Brennan stated that “Trump’s … performance in Helsinki, exceeds the threshold of ‘high crimes & misdemeanors.’ It was … treasonous.”
In a recent article, Pat Buchanan stated that had Brennan made the same accusations of treason against former President Andrew Jackson, ‘he would have been challenged to a duel and shot.’
As you know sir, on the security clearance form, Question 29 reads, ‘have you ever supported overthrowing the U.S. Government?’

I think it’s more than apparent, from his nightly rantings on CNN to his Twitter expletives that John Brennan supports over-throwing the President and the current cabinet members of the US government.

You also wrote, sir, in reference to the President, “Through your actions, you have embarrassed us in the eyes of our children, humiliated us on the world stage and, worst of all, divided us as a nation,”
Actually, Admiral, the only person who has humiliated the US on the world stage in the last decade is Barack Hussein Obama. During the eight years of the Obama administrations, the world watched as the US cow-towed to Iranian thugs, let the Chinese run rings around us in the Pacific, while ISIS murdered tens of thousands of innocent people in the Middle East. Believe me, Admiral, the children of Syria and Iraq are rejoicing in their liberation from ISIS mass murderers. And, the people of the Middle East and across the world are sleeping soundly tonight, knowing that an incompetent, narcissistic maniac like Hillary Clinton isn’t sitting in the Oval Office.

As far as the nation’s current political schism, you need only look at your fellow liberals who are inciting violence and propagating hatred on a daily basis.

You then dared the Commander in Chief to revoke your security clearance.

I’m sure you’re aware of the following regulation in the UCMJ. Retired military officers are subject to the Uniform Code of Military Justice (UCMJ) under Article 2 of the UCMJ, which extends the jurisdiction of military law to “Retired members of a regular component of the armed forces who are entitled to pay.” “Retirees are subject to the UCMJ and may be tried by court-martial for violations … that occurred … while in a retired status.”

Something to ponder, sir.

No doubt your OPED was designed to whip up some more anti-Trump hysteria and to usher you into the political arena. No doubt you are a serving member of the ‘resistance.’ No doubt, you have your eyes on some office space in the capitol building or in the White House. No doubt, you have your eyes on the prize, all at the expense of the nation you once served.

When I read your OPED, sir, I wondered where and when and why you went wrong. How does someone from a military family, a SEAL, who came of age in the Reagan years; someone who understands what it’s like to be on a team; the camaraderie, the toughness mentally and physically required; someone who grew up reading about people like Patton, MacArthur, Lee, Grant, Teddy Roosevelt and Hal Moore- How does a guy like that end up aligning himself with the party of Pelosi, Sanders and Ocasio-Cortez, and slime like Hillary who was chanting baby killer back at Wellesley, and “too gutless to serve, I hate the military” Bill…?

You, sir, are representative of what is, in my opinion, as a former Army Captain and combat veteran of the 7th Cavalry, the worst generation of senior leaders this nation has ever fielded. Bar None. The majority of you, were and are what the late Colonel David Hackworth so eloquently described as ‘perfumed princes.’

Your generation of senior leaders sold and is selling out the nation’s defense to the highest bidder and that bidder is social engineering and leftist ideology. You and your generation of leftist senior leaders have allowed our military to be destroyed for the greater glory of pensions, Tricare and political power, national security be damned. Now, that you’ve overseen the decimation of our military, you are determined to overthrow a sitting President because he represents everything anathema to the left – America First and the fact that the USA IS AND ALWAYS WILL BE THE GREATEST COUNTRY ON THE FACE OF THE EARTH.

You are all nothing more than political hacks; Obama leftists fighting some kind of insurgent anti-Trump campaign like a division of crazed left-wing fanatics holed up in the Beltway National Redoubt, waiting for a last op order from der Fuehrer, Barack Hussein Obama.

I believe sir, that you need to examine your conscience and ask yourself one very important question – what in the name of God Almighty would Hillary Clinton have done for anyone in this country?

The answer is nothing.

I second all of the above sentiments and “Semper Fi” to all my Marine Friends and “All The Way Sir” to all my fellow 101st Airborne Division Brothers. 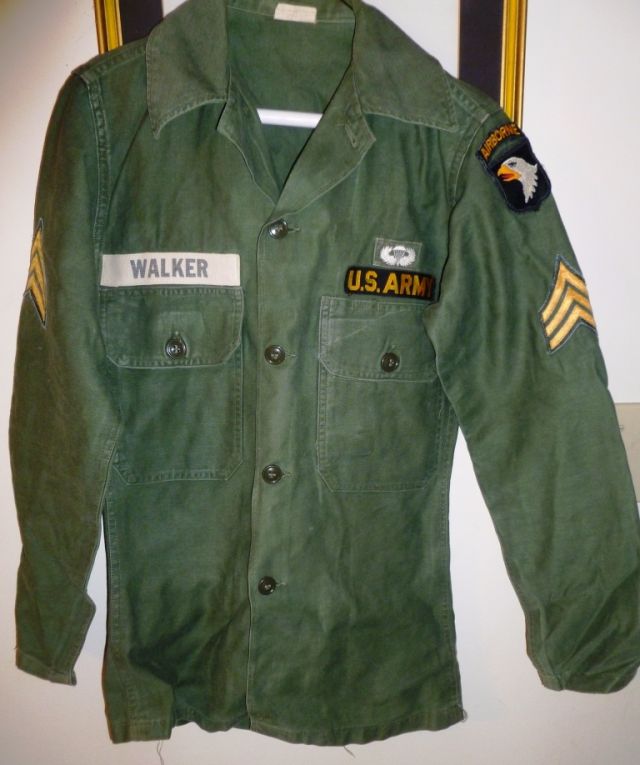