NRC Asking For Comments On High Burn Up Fuel -- Why Increase the Risk!!!? 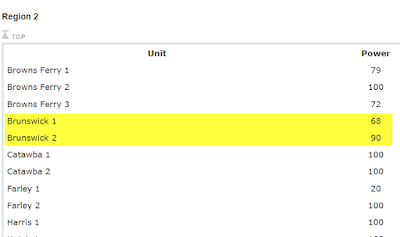 The NRC is discussing "high burn up fuel" which is burning the fuel, making additional radioactivity,
beyond what the historic "acceptable" burnup levels.

You can comment here, up to Monday Night, tonight

For those following the Brunswick Nuclear plant flooding emergency and shutdown, it has taken them 5 days to get both reactors running again, and they are struggling to get to 100% on both.

I have around 11,000 hours experience with the nuclear process and waste handling, and an MSME in Material Science and Thermal Fluids from University of Michigan, so this is right up my alley.

For decades the nuclear industry touted themselves with the idea that the nuclear fuel was a very small part of the total operation of nuclear plants, and that even if Uranium doubled in price that the consumer would not even be effected, making it one of the best energy sources.

If this is the case, what is the big drive to get even more profit out of the process, just a little more profit.   Fuel cost of running a nuclear plant is roughly 1.5% of the total cost, so if you can get 30% more out of the fuel, they might increase profit by .5%.

In relation to the "hotter" waste products that create higher risk in spent fuel pool, and as seen in this article, much more dangerous in dry cask storage, these much higher risks are simply not "worth it" compared to getting a little more power out of the fuel.   See article.
https://miningawareness.wordpress.com/2018/09/23/dry-storage-and-transportation-of-high-burnup-spent-nuclear-fuel-comment-deadline-monday-night-11-59-pm-eastern-there-was-less-than-2-months-for-comments-request-extension/

Casks take roughly 500% more damage, depending on the degree of burnup.  And transportation is much more dangerous.

With Yucca or another long term storage uncertain, we have to rely on the dry cask for the foreseeable future, maybe a few generations.    Increasing the risk is poor judgement.     Just like MOX as a "trick" to "enhance" the fuel cycle the additional risks are not worth it.

And while they sit in water covered spent fuel pools, they present a grave risk.   In a wide area catostrophy, there is no way we can guarantee that the plant would remain staffed, and the electric circulation pumps needed to keep the used fuel cool will continue to be supplied.    Examples could be a nuclear war, or an EMP that could knock the  grid and large transformers out for months, or a Heliophysics based CME from the Sun, which are star sent a few "samples" just in the last few years that missed us, but a modern day Carrington type event could end up with several plants and spent fuel pools going on fire from their self generated decay heat.    Picture 20,000 nuclear bombs worth of radiation being released at the same time.

Allowing high burn up nuclear allows a much higher risk of these extinction level scenarios which are not far fetched, these are not conspiracy theories.   And the risk is not increased by just 30%, the risk is increased by several fold.

Even if just one high burn up accident occurs, it may not be an extinction level event, but it could certainly be a country ending event, as Gorbachev noted that Chernobyl was the root cause of the breakup of the Soviet Union.

It should be very clear that even if the risks are very low for a negative event the costs are very high, and the overall equation based on a very small positive benefit is greatly out-weighted by the overall negative expected value.

It is a bad bet.   A bet we should not take, even though technology allow us to take the bet, it is a foolish bet.

If you were to held personally responsible, you and your family, for the results of this decision, would you take this bet?

The only responsible answer is NO.

Because nuclear is struggling with economics, DOES NOT justify increasing the risks by several fold.
Posted by Stock at 3:30 PM