EQ in Tennessee, 5 Hours After 3 Huge EQ on the West Coast

It is not customary to see 3 large EQ over 6.5 in the same area, all within 40 minutes from each other.    Is this the new normal though?   See the last graphic from October 20, with 4 large EQ within 18 minutes of each other, these though, on opposite sides of the plate.

And for those still denying the interconnectedness of it all, in ways we have yet to uncover, this 3 spurred an unusual EQ in Tennessee.   I thought we might find a fracking operation there, but, well...you decide or investigate more. 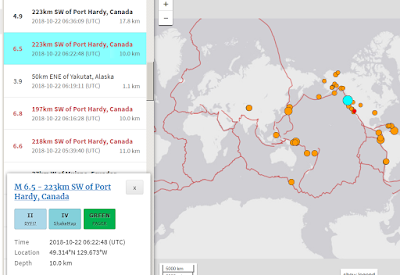 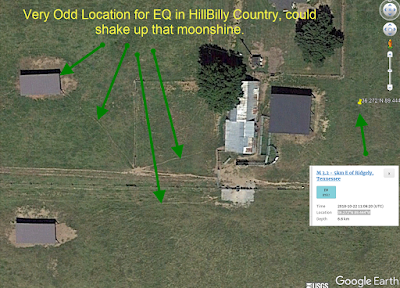 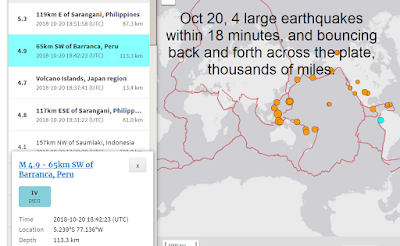 And what the heck are these "Rock Bursts"?! This one at 4.8 Richter

In terms of lives lost, rock bursts in underground mines can be as hazardous as earthquakes on the surface. So it is not surprising that fo the last 40 years the U.S Bureau of Mines has been using seismic methods for detecting areas in underground mines where there is a high differential stress which could lead to structural instability of the rock mass being excavated.
The microseismic method relies on observational data, amply demonstrated in laboratory experiments, that acoustic noise occurs in rocks subjected to high differential stresses. Acoustic emission becomes most pronounced as the breaking strength of the rock is reached. Laboratory studies have shown that the acoustic emission is linked with the release of stored strain energy as the rock mass undergoes small-scale adjustments such as the formation of cracks. Studies in actual mines have shown that acoustic noises often precede failure of rock masses in rock bursts or in coal bumps. Seismologists are, therefore, very interested in whether these results can be applied to large-scale failures; that is, earthquakes. An active research program in predicting rock bursts in mines is being conducted by Brian T. Brady and his colleagues at the U.S Bureau of Mines, Denver Colo.