stock here -- some type of meetings can only be conducted in person.    Note the strong bout of airplane sales, fueled by fuel, lower corporate tax rates, and the epic corruption that requires person to person conversations. 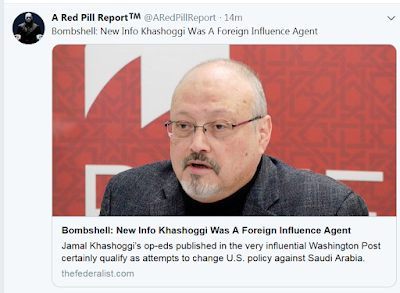 But during Security Studies Group research for our report on the information operation after his death, we heard from reliable sources familiar with the investigation that documents showing wire transfers from Qatar were found in his apartment in Turkey. They were immediately put out of reach by Turkish security services, so they did not show the collusion between Khashoggi, Qatar, and Turkey prior to his death. We have published a new, unredacted set of findings about the case. It is damning to Qatar, Turkey, and the Washington Post.


Someone should have told Hillary and Podesta about "email"

Hillary's in person trip to Japan after 311 Fukushima to make a deal to buy their radioactive food and feed it to Americans, without testing, in exchange for ......?   My Intuition says, especially since it was Kissinger advice for her to go to Japan, was to simply soften them up on Globalism, letting in immigrants, Paris Climate agreement (which is basically a way a extract wealth from energy, and to control energy sources).     Paris is a tough one for Japan, without nuclear they rely more on imports of Oil.....And shutting off their Oil is the biggest piece that caused them to attack Pearl Harbor.

Excluding such faults, and they are major, Galloway brings a level of ghoulish wit to this drama unseen in other venues. Tom Friedman may never recover from his rapier.

For more fun, the origin of the word ghoul:
1. An evil spirit or demon in Muslim folklore believed to plunder graves and feed on corpses.

Did you note the poor condition of Jamal’s skin in most photos? I see radiation damage, most likely from years-worth of upper-atmospheric exposure gained from flights at altitude.

Fried his brain, too, if it proves up Jamal was a co-conspirator of the MbS assassination attempt last year in LV.

Some allege the mass shooting was a cover to kill MbS in the melee. He may have been wounded…it’s reported he was there to meet clandestinely w/ Trump.

If true, it appears MbS and his gang [informed by Trump’s NSA] had enough evidence to justify barbaric acts [13th-century standards]; pulling out tongues and gouging eyes is an effective deterrent.

Audio and video recording is bad optics…but with the convenience of Skype for business meetings, this one will be remembered as the penultimate: YOU’RE FIRED!