stock here - per usual, the "experts" are left in the dust by a simple obvious observation.    Last May I noted the Hawaii Volcano getting its largest earthquakes in in wee hours just past midnight.    That got me thinking.....why is that?

Then my Heliophysics work on Sun, sun spots, magnetism, and effects on earth's magnetic fields and thus on the blocking or allowing of GCR's (Galactic Cosmic Rays with 1000's of times the energy of normal gamma rays) could be at play.

When the sun is "quiet" we get more Cosmic Rays enter the atmosphere.   This causes cloud nucleation and thus clouds, and relfected sunlight, and cooler temperatures.

The new Hypothesis is that the GCRs, which can penetrate 2 or several miles into the earth also activate gasses within the magma, which then cause rising of a gas filled volume, which reduces pressures, and causes expansion of the gases, more and faster rising and then release of other gases as the pressure comes off even more.    Stock said so.

In 1257 Rinjani volcano erupted, it was  a big one.   It came as the sun was very quiet, the Maunder minimum.    And between the quiet sun, and the super eruption, the little ice age was started.   Those times sucked, with crop failures and regime change.

Note of this coming from Mary Titus and Leuren Moret 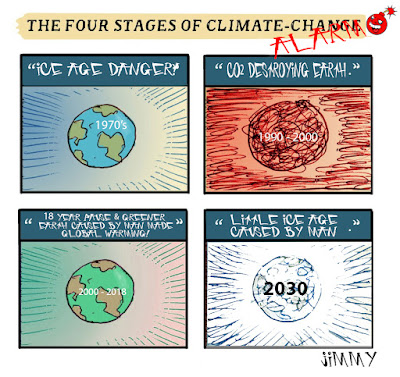 Subject: Cataclysmic eruption may have kicked off ‘worst year” in history for humans - study

Cataclysmic eruption may have kicked off ‘worst year” in history for humans - study
Hi Bob - This could very well be the cause of the Dark Ages, and if so, it shows how NATURAL events on the earth can also cause cooling/warming periods.  During periods of orogeny (mountain building from tectonic collisions like Himalayas, Andes, Rocky mtns., Kilimanjaro etc.) mountain chains form with active volcanoes on the crest of the chains (like Sierras in Calif. - there have been diamonds found in alluvial deposits where gold nuggets are found).  These massive volcanic events last a long time and pump huge amounts of gases, particulates, and water into the atmosphere, causing blocking of sunlight which lowers temperature.

I think this is an interesting article, because the chemical fingerprint for each volcano is different.  They can analyze the dust they find in glaciers for that period, and chemically match the rare earths in it to the volcano the dust came from.

Many many volcanoes around the world have been chemically fingerprinted because it is used in so many disciplines - ice cores used to create an ice record of climate change, archaeology where obsidian is used to establish trading routes, dating flows on volcanoes to build a history of eruptions etc. etc.  I am surprised that the ash in the Swiss glaciers was not matched with the volcano it came from already.
The four ages of Climate Change denial - (see graphic above)

Some sources choose 6 super volcanos: Maybe we call these the Mega-Volcanos

One of the "second string" super volcanoes is showing activity of note:

Campi Flegrei is the volcano name,


Newsweek noted that the movement of magma has risen from depths of 5 miles to just 1.8 miles, raising concerns that the volcano is “reawakening.”

And "they" state that they have solved the mystery.    LOL they were shooting Xrays at hot magma in a lab, and they never once stopped to consider that Gamma Ray, GCR's from space, could instigiate, nucleate gases within the Magma and cause expansion and rising.     My Hypothesis.

This is the BBS after all, LOL
https://www.bbc.com/news/science-environment-25598050