stock here -- although I like to see these usually covered up risks being exposed, it is unfortunate that writers, and commentors haven't educated themselves enough to ask the right questions, to explain the real risks, the chemicals/rads, and impacts.

One  commentor asks "got Iodine".    It's plain wrong and a false sense of security.   People think that "Iodine" is some magic radiation protection, when it fact it only protects against one type of radiation I-131 (and to a lesser extent I-129 in much smaller quantities, but with a long half life).   I-131 has a half life of 8 days which start when the reaction or the accident ends.    So in 80 days, it is pretty much all gone (2 to the 10th power).   Iodine is no longer an issue from the 1960's much less than from even a year ago.

See the smoke movement video.   Normally winds are west to east, but during this fire they were east to west, taking the smoke and radiation over the Pacific Ocean, as if the Pacific needed another dose of radiation.

Also good to see that many commentors are still familiar with what Fukushima did, which was covered up by the Obama administration, and Clinton, working in conjunction with Kissinger.

The "Directed Energy Weapon" meme does appear to have some basis in possibility. 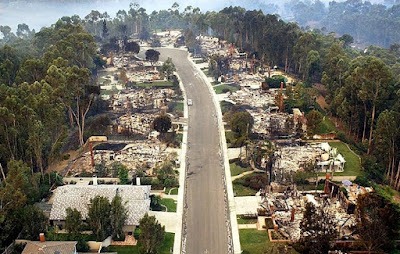 The 95,000 acre Woolsey fire which has coated Southern California with an apocalyptic orange glow may have released a toxic stew of radioactive particles and toxic chemicals into the air, after scorching the land on closed-down government weapons testing facility in Simi Hills known to be heavily contaminated from decades of experiments.
Commencing operation in 1947 for Rockwell's Rocketdyne Division, a government contractor for the Atomic Energy Commission (AEC), the Santa Susana Field Lab (SSFL) has a checkered safety record, to put it lightly. In addition to several nuclear accidents - including the worst nuclear meltdown in US history, toxic materials have accumulated on-site from years of dumping, just miles from thousands of residents.

(Edited)
While the communist insurrection continues, La Raza rants about atzlan and the globalist agenda of reconquista that goes on and on unabated, the vote scam is on like donkey kong and no one or nothing is going to stop the communist take over of America. You can make a sure bet this slow killing radiation that is ever growing in amounts and at a faster killing pace will stop everyone, and everything eventually...prolly sooner than later.

There are reports from utah, colorado, new mexica, arizona all indicating higher levels of radiation incoming from the fires on the west coast, as well as the ever increasing amounts from the fuckushima ELE. All the retards that moved to those places, especially colorado, have not known that is one of the most radioactive states in the country. There they grow the massive amounts of marijuana for CBD concentrates, but have no idea that the CBD oils made from the outdoor marijuana cannabis plants are highly irradiated from the fallout that not only is constantly never endingly coming from fuckushima in the jet streams every day, but now also from the fires that burn anywhere west of them. Talk about stupid. Who can't wait for those who figure out that there is profits in suing CDB oil makers for cancers caused by the CBD oil that is supposed to abate cancer. Lol...stupid is so blatant, it is criminal at most times.

http://radiationnetwork.com/
http://www.stormsurfing.com/cgi/display_alt.cgi?a=nam_250
But lets get back to the present situation.

The nasty rottenchid gew zionists that caused fuckushima with the stuxnet virus, are giddy that they have succeeded in the rottenchids agenda of dumbing down, and slowly killing ALL AMERICANS AND ALL ILLEGAL ALIEN INVADERS eventually after they all make a good go of killing each other. Those satanic/luciferic areshole rottenchild puppet zionist pukes are masters of pitting people against each other so they can profit from the deaths and destruction they cause. You have two world woars they did on the world as proof and now, the USA is being set up to fall to the communist surprise attacks that are coming. There will be so much chaos and anarchy, the dying breeds suffering long term radiation poisoning will not even care. Zombification comes from long term brain exposure to radiation.

So, as it appears, a lot of the reports and information about how the brain is effected by low dose radiation has been scrubbed from the net after Fukushima.

Place it here if you find it. There is still significant evidence to the truth that yes, low dose radiation is causing brain defects that can cause women and people to be more crazy and disfunctional than normal. As time goes on, the real effects will be seen in the obviousness of the insanity taking place, more and more.

May God have mercy on the ignorant that shat in their own bowl of oatmeal. Slow death of all world civilizations is on the horizon. Will it be by the hand of Nature, or by the hand of man/woman?
Hummm...if only mankind was smarter than the monkey.
Posted by Stock at 4:36 PM