Cali Wildfires Caused By Negligent Utility Maintenance? If Corporations are "People" Can They Be Hung?

The insanity continues. You thought we might get a break after midterm elections?

Not by a long shot. The meme generators are at an all time high.

It's fairly easy to catch them in the act, but does take some time and a broad review of various sources to see what "is being pushed".

Here is the story about the deadly California wildfires.

A reader submitted a meme that didn't even cross my mind.    These fires (15 of them) were all intentionally set, almost at the exact same time.    Under a theory of maximum chaos, maximum stress, maximum financial difficulties, a classic roll out of Globalist agenda to weaken and stress the USA.    At a cost of less than $100.    How could they not take this opportunity?   See bottom for video.

Fox goes on to describe the smoke as "toxic" implying that this is something more than normal smoke.    No doubt, I think that the levels of several atomic bombs of radiation could be released, as northern California was heavily dosed from Fukushima fallout.   That radiation get bio-incorporated into the plants and trees, and gets released in a fire.    The fire cannot alter or eliminate the radiation, nor the process of bio-incorporation into plant life, only time gets rid of radiation.    And at the end of that multi-step process...the best case scenario is that you end up with lead.


This other article attempts to dispel "toxic" even though the Fox article never even hinted at radioactivity.

Any interesting place, Rocketdyne, caught my eye.   That was the site of a major radiation accident, that was poorly cleaned up.

All the Big Tech is scrambling.   Google has been throwing warnings at me for weeks now, since I traveled to Hawaii, and using different computers.    They are creating inconvenience and uncertainty for me on whether my log in attempts or websites edits will "take", for the purpose of trying to convince me, that they are looking out for me.

The media continues to fan the flames of hatred and division, with MO attacking Trump, and in, of

all Mayberry type places, Baraboo Wisconsin, apparently student raising their hands for a picture, is a full on hate crime.

Fox is crashing and burning, too.   In the Baraboo story, they don't even provide "said picture" so people can make some objective decision of their own.

The hypocrisy is beyond amazing.    The school then, in total Marxist fashion, decides to attack the students in the photo with any means possible, including legal action against them.

2 min for every fire, each new blaze?

The utility's report, which was submitted "out of an abundance of caution," said the Woolsey Fire was reported at 2:24 p.m. on Thursday -- two minutes after an outage was reported at the substation.

A CME from our star, the sun, could blast a whole hemisphere back to the stone age. And think of the additional risks once our transportation systems are mostly electrified? No ability for recovery, but plenty of opportunity for invasion. This is a national security threat and these greedy utility asshats can't even keep the trees trimmed away from their power lines. 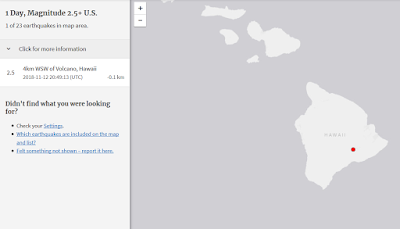 Many follow me for my work on Earthquakes and Vulcanism.    So will drop this EQ in Hawaii.   It's
at a "normal" place, the caldera of the erupting Kilaeua (well used to be erupting).

Add part....it is right at the surface, I wonder how many are that shallow?
Cali fires intentionally set?