Clintons, Podestas, Mueller et al: The Cast Of Characters of Uranium One

I added video of the complete whistleblower testimony at the far bottom.

stock here: I have been totally focusing on work and personal projects, but couldn't let this one slide.

1) Clintons Leave the Country
2) Cohen Hammered in order to "implicate Trump" and Flynn likely to be off the hook (because Trump would pardon him anyway) and they hoped to keep further revelations of the criminal activities of Comey and the CIA/FBI unit from becoming "fact". 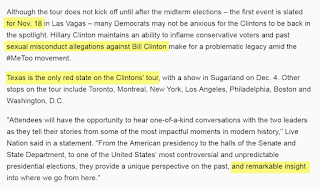 Clinton Foundation back in the news.

Whistle blower expected to testify on Uranium One (today)

On the funeral card, Q states that it was "Our Promise to Counter", and by that he means to counter
moves by the Deep State.      The D5 (lol 5 D Chess) Chess move continued even yesterday, with Meliana flying to the Carrier GW Bush.

It should be noted, that many members of the Deep State, don't really even realize that they are Deep State, or even Deep State Tools.   They think they are "doing the right thing", and these SDS swing Deep Staters are ones that can be swayed and bamboozled by the Trump's praise and show of respect for GW Bush.


ZH with info on the WhistleBlower "explosive" revelations.
https://www.zerohedge.com/news/2018-12-13/watch-live-clinton-and-uranium-one-whistleblower-testimony-capitol-hill

and a better one the next day
https://www.zerohedge.com/news/2018-12-14/financial-bounty-hunters-testify-clinton-foundation-operated-foreign-agent

The only "red state" money generating event, was "postponed" but without any announcement, of a reschedule".      They claimed that it was because of Bush funeral.

The above link also verifies Hillary leaving the country "for a week, to celebrate an Indian wedding"

This weekend, though, Hillary Clinton was spotted getting her groove on at a high society wedding in Udaipur, India, according to The Hill, and is expected to be in India all week, celebrating. 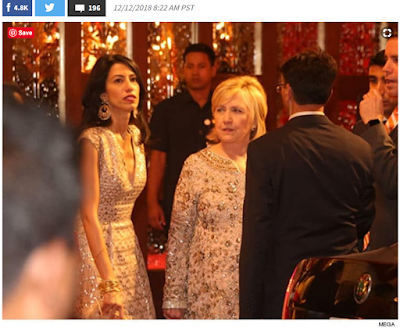 So is the tour cancelled, or postponed, this site says cancelled, due to poor sales.   But other things
like jail time may play a part, especially in terms of getting out of the spotlight.

And instead of taking Bill Clinton along, Hillary took Huma Abedin, of Muslim Brotherhood fame, and her former advisor.   Seriously.    These people are stupid. 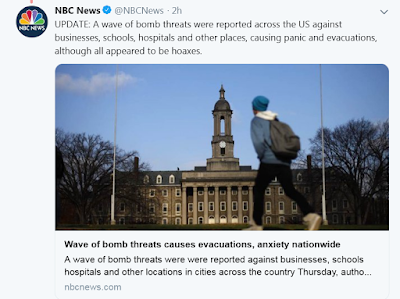 As the whistle blowers testify in front of Congress, today, a wave of bomb threats were reported
across the USA.     I guess "they" didn't have time to set up a real false flag event to drown out the coverage of the Clinton Foundation and Uranium One whistleblowers.

This reminds me of the "fake bombs" that were sent without enough postage and without the postage being cancelled to the Democratic candidates before the midterms.

Sheesh, I had a nice writeup of the cast of characters, including Sally Yates, Matthew Axelrod (Yates Deputy) and David Axelrod (Matthews brother and  chief strategist for Husseins presidential campaigns) were also involved in PREVENTING investigation into the Clinton Foundation.

Incidentally, they all walk free at this time.

Yates took over for Lorreta Lynch, who took over from Eric Holder of Fast and Furious fame.

Another senior Obama Administration official said, of Yates, “The reality was that the President saw her as more committed and more effective to his agenda than he did Loretta. That’s just a fact.”
Can't we keep criminals from occupying the highest offices such as Attorney General?

Sally Q Yates was Attorney General, and she eventually admitted that she ordered the FBI to NOT investigate the Clinton Foundation.    Yates used Axelrod to pressure McCabe, and this was reported by McCabe.

Yate's Husband, Comer Yates was one of the top donors to Obama.

Kevin Clinesmith
Tashina Gauhar
Sally Moyer
How do you ensure those prosecuted [non military] would receive an impartial judgement based on the RULE OF LAW?
Think Federal Judge rulings [obstruction] [POTUS’ granted CONSTITUTIONAL authority].
How do you ensure 'appeals' to the U.S. Supreme Court are evaluated impartially > based on the RULE OF LAW?
Think Justice K (5 to 4).
Military Law v Criminal Law
“Enemy Combatant”
How do you navigate around installed BLOCKADE?
[MUELLER] designed to take-in evidence needed to ‘expose’ DS

He pushed that story.

in reality, fake bombs, fake mailing.    The had incendary material in them, they said, yeah, cardboard.

That is all you need to know about Wray.    DS mo-fo