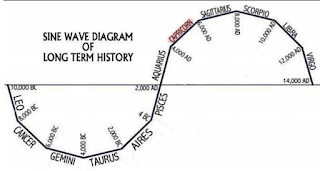 Along with a whole mess of interesting items on space weather, Galactic Cosmic Rays GCRs, Magnetic Pole Shifts, and last but not least we cannot forget the "Wobble".

The Wobble is a bit of a mis-nomer.   It makes it seem like the earth is shaky (well EQ researchers know it is), shaky in a grand rotational movement through space type of way, and it really isn't shaky.    It precesses along a "tilt".   This tilt can be understood only in a "frame of reference", and that frame of reference most simple to understand is our plane of rotation around our star, the Sun. This is actually what causes summer and winter on earth, are we tilted towards the sun, or away from

the sun, and the impact of amount of atmosphere that sunlight has to travel through, and also the way how a "chunk" of sunlight is spread over more or less land area.    See Graphic.

Every 26000 years the Earths Axis rotation completes a full cycle.    As this precession goes on, the axis points more towards particular Astrological formations in the night sky.    Certainly the politically correct will point out the arrogance of the Northern "privilege" in picking the Astrological features of importance.

This 1969 song from the "5th Dimension" was my introduction to the Age of Aquarius.   So I was a little surprised that we actually entered the AOA just in 2011.     In reality the song expressed that we were at the dawn of the AOA.

This video goes a bit more in depth

And yet another look at the motion of the earth.