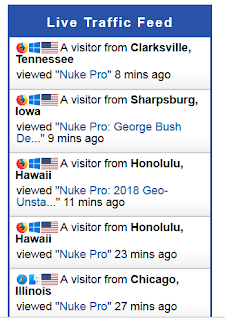 stock here -- resident "troll" who is probably not a bad guy, just brainwashed by nuclear, visited shortly after I responded to a comment he made on volcanoes and radiation.   Clarksville TN caught my eye with visitors.    Interesting....Loose Nuke is commenting from Oak Ridge Tennessee.   Imagine that.

In addition to the strandings at Chatham and Stewart Islands this week, a group of 12 pygmy killer whales also beached in New Zealand’s far north and a sperm whale and a pygmy sperm whale grounded themselves in separate incidents on the North Island.

The reason whales and dolphins strand is not fully understood but theories include sickness, navigational error, geographical features, the presence of predators, and extreme weather.

New Zealand, the cluster of incidents in such a short time frame was unusual.
We definitely have a spike in temperatures, that is likely affecting where the prey is moving

She also pointed out that species such as pygmy killer whales and sperm whales did not normally beach, unlike pilot whales, which regularly wash up on New Zealand beaches in the summer months.