Just adding to this story, 2 articles, Rivers in the Fukushima area are rapidly decreaasing in radiation, they have a convenient cleaning mechanism.....flow into the ocean.

AND storage tanks at Fukushima, presumable holding the ALPS processed waters which would in theory be highly concentrated in radiation, has leaked 600,000 lbs of water over 2 years, and they story is unclear but there may be 2 tanks involved.

Hmmmmm.....So they have no program to monitor the tank water level, none at all.   Leaks can continue for 2 years until they are noticed. 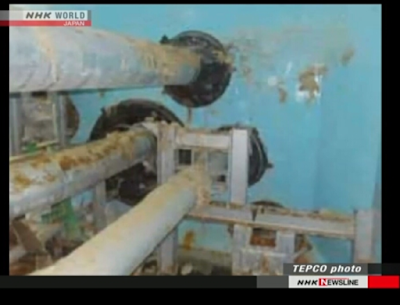 I would like to dig into this story some more, because the pounds of water is an irrelevant statistic
without knowing the radio-isotope concentrations.   And you may recall, back in the day when they were building these, they were only rated for a very short life span as temporary storage tanks assembled by the Yakuza and the homeless, about 2 years expected life.    We are going on year eight, and where the heck are the Coriums TEPCO?

NHK provides some detail, on Tritium.    Holy Hell, it's reported as 120,000 Bq/liter!    So it is probably 2 times higher, or 10 times higher, per the "Order of Magnitude" lies that TEPCO used consistently in the early stages of the Debacle.

The super liberal (what shall we protest today types) University of Wisconsin Madison, aka Wisconsin Badgers, via the Badger Herald is promoting Nuclear Power

A story on Jackzo's Anti-Nuclear book is HERE
And sadly, just today the NRC votes to further gut the flood and EQ safety measures that Jackzo and the post Fukushima Safety Upgrade Study recommended.


During the natural destruction of the Fukushima nuclear power plant in Japan, many people evacuated the area in fear of radiation. But, Goldstein said, the radiation emitted was below the safety standards, and was not actually harmful.

Goldstein recognized that many people are also afraid of nuclear waste and how to dispose of it, but their fears are also unfounded