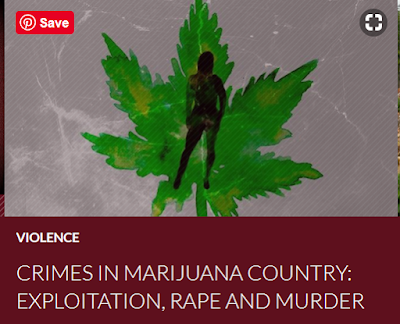 No time for a deep dive on this one.    Methinks that some powers that be are becoming more aware that people who think outside the box, are less likely to accept the bullshit memes that are attempting to enslave the population, attempting to divide everyone in everyway possible, attempting to "make it all suck" as a way of grabbing more power, control, wealth.

Worse — because marijuana can cause paranoia and psychosis, and those conditions are closely linked to violence — it appears to lead to an increase in violent crime. Before recreational legalization began in 2014, advocates promised that it would reduce violent crime. But the first four states to legalize — Alaska, Colorado, Oregon and Washington — have seen sharp increases in murders and aggravated assaults since 2014, according to reports from the Federal Bureau of Investigation. Police reports and news articles show a clear link to cannabis in many cases.


Can you spot a few false arguments in just the few sentences below?

Decades ago, many of the same people pressing for marijuana legalization argued that the risks of opioid addiction could be easily managed.

A half-million deaths later, we have learned how wrong they were.

Marijuana’s risks are different from opioids’, but they are no less real. Let’s remember that hard truth as we listen to promises that allowing

January 5, 2019 at 11:26 am · Reply
Except for two non-fiction books, Alex Berenson writes spy novels. Pot is really out of his genre, as well as his grip on reality.
Jacqueline Basha Berenson, MD, his wife, is a forensic psychiatrist and researcher at Columbia University. She may be the inspiration for Alex’s hit piece on cannabis, and that may be due to what appears to be an OD death of her brother, Joseph Basha, in Hong Kong in 2011:


28 December, 2011 — Distraught relatives were last night trying to come to terms with the death of University of Hong Kong student Joseph ‘Joey’ Basha after it emerged that his body was found slumped in a public toilet near his home, 48 hours before he was reported missing.
Friends and family were informed of his death only yesterday – four days after they told police Basha was missing and six days after his body was found in Yau Ma Tei, a 20-minute walk from his flat in Jordan.
Basha’s sister Jacqueline Berenson, a forensic psychiatrist, and her husband, Alex Berenson, a novelist and former New York Times journalist, arrived from New York on Monday night with plans to search the city’s hospitals.
‘Jacky’s in terrible shape right now,’ Alex Berenson said yesterday. […]
https://www.scmp.com/article/988676/body-canadian-found-toilet

Alex Berenson is the named author, but that’s likely due to his books being best sellers, not because he’s a drug expert.
So we end up with a familiar scene. Jacky, a professional psychiatrist, but certainly not a molecular psychiatrist, needs a scapegoat to blame for her brother’s OD death, and like hundreds of others have done, she blames marijuana because it’s been called a gateway drug.
Columbia University has been the stomping ground for quack psychiatrists such as Dr Robert DuPont, and his trusty sidekick Kevin Sabet. The caliber of the propaganda certainly sounds as if it came from Kevin, so a connection may exist.
As for Yale graduate and author Alex Berenson, based on his vitae, I would color him CIA.

stock here --- kind of a joke now, Yale and Harvard have recently been producing some of the most ridiculous members of our engineered society.