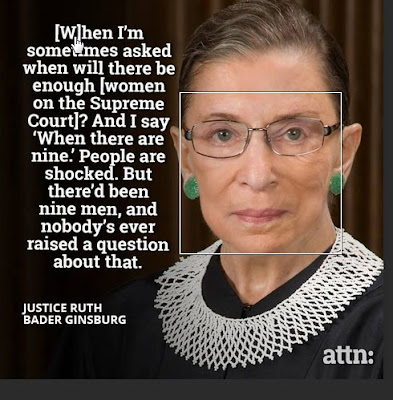 I know most of this from reading about what this "lady" really represented.

Some of her most abhorent views and policies she wanted to implement:

1) Boys and Girls as young as 12 should be "able" to have sex with adults of any age or sex
2) Interstate Sex Trafficking of Boys and Girls should not be treated at a crime, but should be "covered" under privacy laws.
3) She thought that Prisons "Should be Co-Ed" without any discussion of the obvious problems that would come up.

&gt;Called for the sex-integration of prisons and reformatories so that conditions of imprisonment, security and housing could be equal. She explained, “If the grand design of such institutions is to prepare inmates for return to the community as persons equipped to benefit from and contribute to civil society, then perpetuation of single-sex institutions should be rejected.” (Page 101)

&gt;Called for the sex-integration of Boy Scouts and Girl Scouts because they “perpetuate stereotyped sex roles.” (Page 145)

&gt;Insisted on sex-integrating “college fraternity and sorority chapters” and replacing them with “college social societies.” (Page 169)

&gt;Cast constitutional doubt on the legality of “Mother’s Day and Father’s Day as separate holidays.” (Page 146)

&gt;Called for reducing the age of consent for sexual acts to people who are “less than 12 years old.” (Page 102)

&gt;Objected to laws against prostitution because “prostitution, as a consensual act between adults, is arguably within the zone of privacy protected by recent constitutional decisions.” (Page 97)

&gt;Ginsburg wrote that the Mann Act (which punishes those who engage in interstate sex traffic of women and girls) is “offensive.” Such acts should be considered “within the zone of privacy.” (Page 98)

&gt;Demanded that we “firmly reject draft or combat exemption for women,” stating “women must be subject to the draft if men are.” But, she added, “the need for affirmative action and for transition measures is particularly strong in the uniformed services.” (Page 218)

&gt;Wanted he, she, him, her, his, and hers to be dropped down the memory hole. They must be replaced by he/she, her/him, and hers/his, and federal statutes must use the bad grammar of “plural constructions to avoid third person singular pronouns.” (Page 52-53)

&gt;Condemned the Supreme Court’s ruling in Harris v. McRae and claimed that taxpayer-funded abortions should be a constitutional right.

http://humanevents.com/2005/08/23/senators-overlooked-radical-record-of-ruth-bader-ginsburg/📁📁
Who are the doctors 'currently' treating [RBG]?

What other political [former/current] sr. political heads are they affiliated w/?
What 'off-market' drugs are being provided to [RBG] in order to sustain minimum daily function?

What is the real medical diagnosis of [RBG]?

Who is managing her care?

Who is 'really' managing her care?

The clock is ticking.