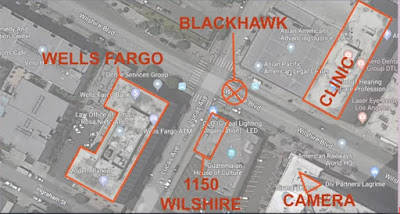 Summary.   Special ops military rolled up in wheels, and the vehicles left.    They explosively
accessed a building (s) and then explosively accessed an interior space.

Their target was so "high value" that transporting it through the streets of LA was unacceptable.   As in the bad guys could have re-acquired the target and used it.

Suspected bio-warfare device, as this neighborhood is covered with medical industries and treatment centers, so a "release" has some plausible deniability.

Wow --- for some reason I decided that pursuing this story was important.   And let me lay it all down now.    This all wraps  in the Deep State, Adam Schiff, Pedophillia, the "Standard Hotel", and Q from early 2018, Guatemala, CIA Funding, and the startup of the Clinton Foundation in 1999.

Here is a Video review of Q related
https://www.youtube.com/watch?v=efIXwR6lToE

The Standard Hotel, promoting "radical self expression", their web page reads like a playbook from the New World Order.
https://www.standardhotels.com/
The Standard Hotel is just blocks away from the "Raid" at Wilshire Blvd. 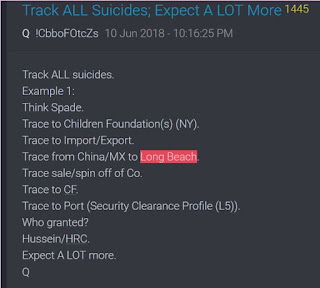 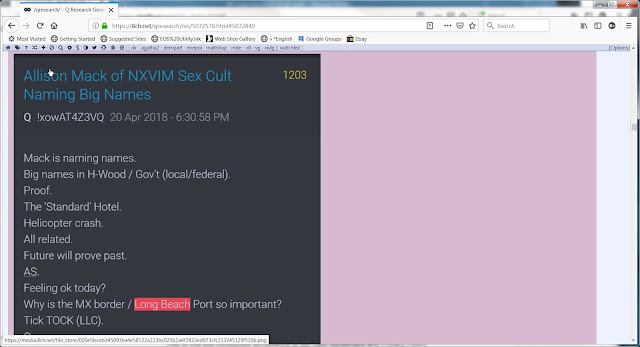 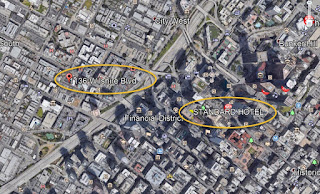 The "sanctioned media" covered the dog and pony show "drills" over Long Beach.   That is the distraction part. 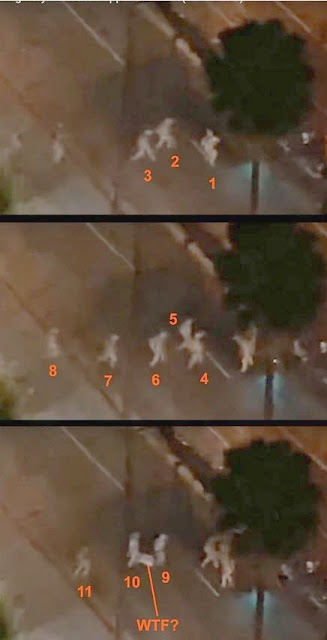 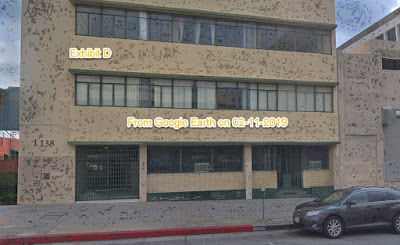 Sorry folks, this is messy and ongoing.    I am a photographer, and have some special tools that can do quite a lot, and some simple tools that can do great things quickly.    I wish I could enhance the whole best video, , which is at the far bottom......but don't think I own the tool and never tried.   But I can enhance some screen captures from the video.   These are "white suits" leaving the buildings and loading the helicopters.

I am adding information to the top of this story.   If you want the MEAT, read downward too.

Bottom line....this was not a drill.    It was in a medical research district in which seems 6 rooftop landing pads within blocks.....and right across the highway, blocks away, the main financial district of LA.

A large Wells Fargo building is right across the street.    Odd that Wells Fargo had such a huge computer outage recently. 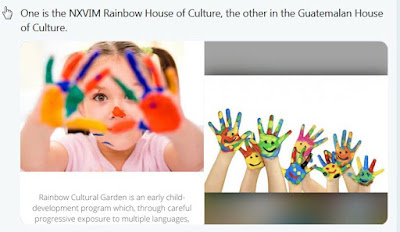 Throwing this in at top.    One of the 2 buildings at the extraction site, both owned by Giardi, was the
Guatamalan House of Culture.    I wonder how many "kids" are transported from Guatamala into USA and for what use?

Get it?   Big Money and Big Medical right there.    Here is some 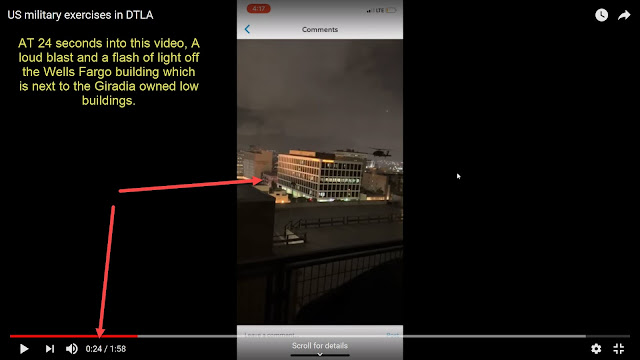 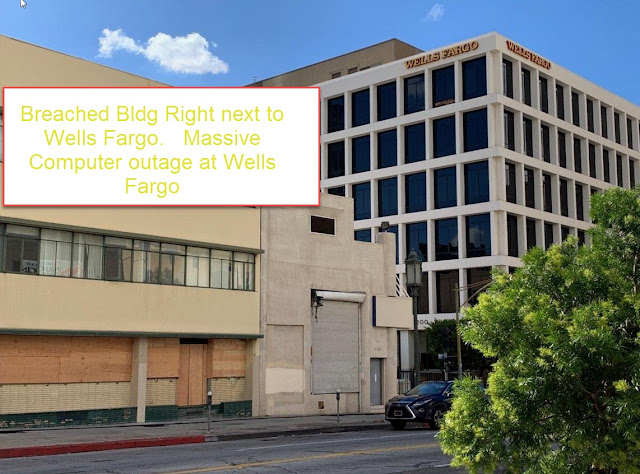 perspective of where this Raid/Extraction went down.

Some videos showed and played sound of multiple explosions.   But do we know they are in the same place?   I mean local CBS was pimping out the "training exercises" around LA and Long Beach.    Well the video below matches the picture above, showing the blast against the Wells Fargo glass walls.   The blast could have been at Wells Fargo and double reflected.  The second blast, at around 46 second, does not show any exterior blast shine.    In other words, they are inside the building, and they are breaching yet another interior containment. 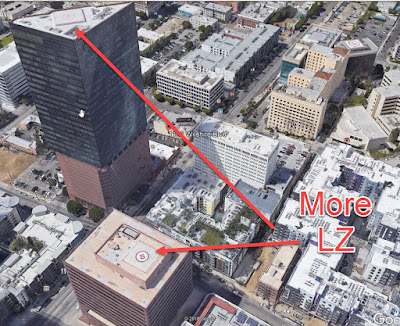 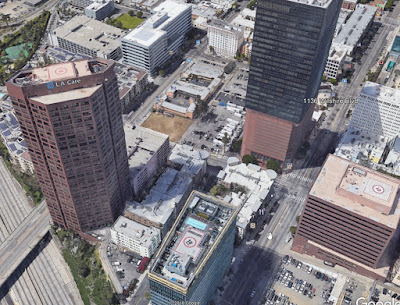 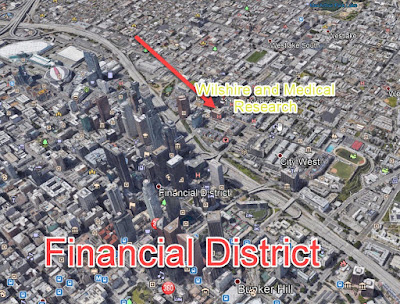 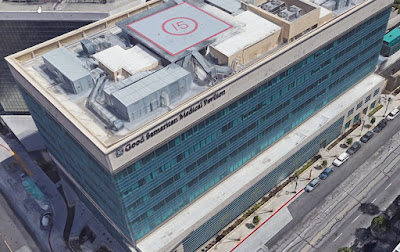 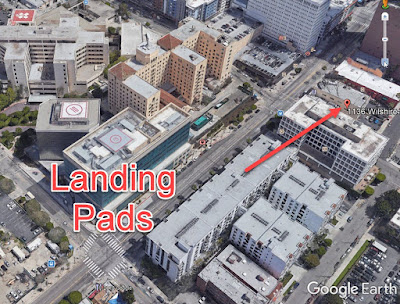 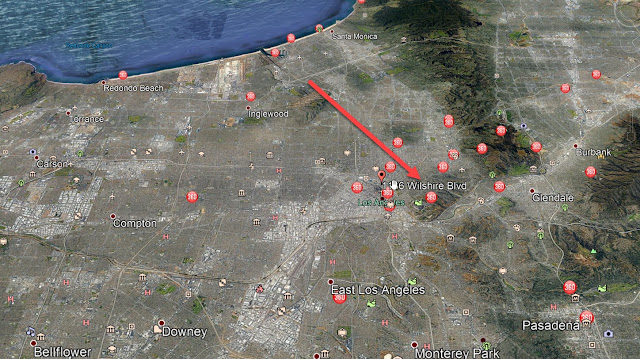 A nay-sayer at VOAT stated that the building was boarded up approximately 4 years ago (with no
indication on how he estimates age of a Google Earth picture.    So I grabbed this one on my own, fresh from GE.    Closed in this picture, but definitely not "boarded up"

Here is an old Yelp page on a prior occupant - Wilshire Cafe
https://www.yelp.com/biz/cafe-wilshire-los-angeles

Google, as dysfunctional as it can be, is not allowing me to comment on my own blog, even if I log in anon.   Sheesh, per comment below from
https://webofslime.blogspot.com/

I was not able to confirm the link between the explosive breach location and the next door lawyer firm Girardi and Allison Mack of the Sex Cult "fame" and trial. 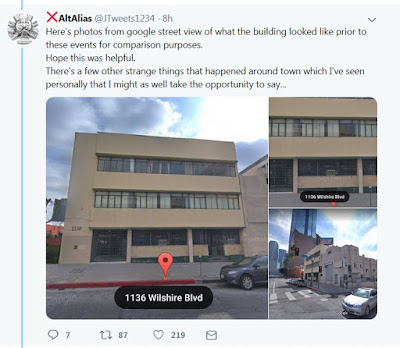 They would not conduct a drill in a populated area, flying multiple helicopters into a city street with tall palm trees on the roadway.     There are mock up areas on military bases for conducting all type of "urban warfare" training.    An accident, if this was a drill, would be a career ending maneuver.

I'll put the video at the far bottom.   Crews of people in apparently white uniforms (hazmat suits?) removed things and maybe people from the building(s).    What was so important that they couldn't just drive up, and drive out?

Because they couldn't risk their "acquired package"  "going 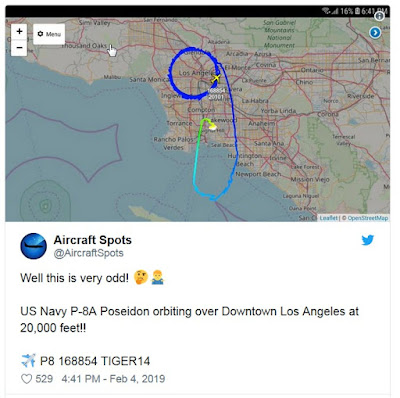 off" or being intercepted while driving through LA.

My first thoughts were a bio-weapon, or a bio-weaponized person.    My intuition, sorry to be non-humble, is beyond spectacular.

The white suits, travelled off with the helicopters.   They were extracted, after some mission

And the P-8A Poseidon circling on Feb 4.    The P8 replaces the old Turboprop P3, its job can be many, but coordination of other aircraft in a strike force is one 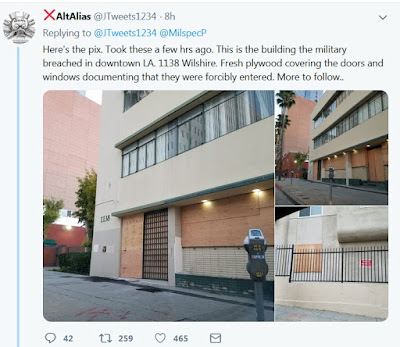 of them.   Electronic survelliance, including video

There is some controversy over the address of the building, although an address can be seen clearly in this Google street view shot.   1138 Wilshire.

The building was forcibly breached, and boarded up as shown by eye-witness photos below.

A connection with Girardi Law Firm which is at 1126 Wilshire?   The next building over from the "Guatamala House of Culture"

Girardi is "ambulance chasing" California wildfire victims.   But do you know who else they represent?   Allison Mack or the NXIVM Sex Cult.

Military drills announced by CBS for Feb 4 to 9

The "Helicopter Video" at far bottom is reported to be from Feb 4.

This video shows a helo hovering near the edge of a building, and some apparent explosion sounds, and flashes from the blasts.    I "re-cover" this video above, it's important, and the flash bang is off the Wells Fargo building on the street of the breach.
Posted by Stock at 8:43 AM