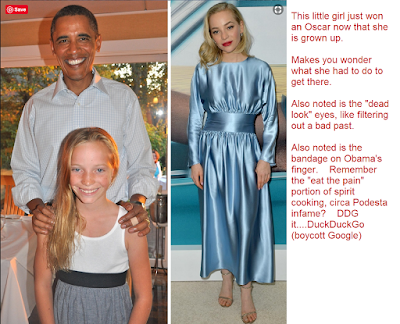 stock here --- this whole Pedophile thing was never on my radar until Pizzagate.

Bill Maher (aka Comedian, aka tool of the Globalists) confirms himself as a Pedophile.   He also thinks that America's only wealthy and educated people are in just a few cities, on the coasts.   Hilarious!
https://insider.foxnews.com/2019/02/25/south-dakota-gov-kristi-noem-responds-bill-maher-mocking-middle-america


In Maher's closing monologue Friday night, he centered on Amazon's decision not to build a new headquarters in New York City. He said the richest company in the world can "do good" by bringing the project to a so-called "fly-over state."
"We have a problem in America called spatial geographic inequality which means the most affluent and educated people are clustered in just a few cities," he said, going on to deride Middle America as less educated and less affluent.


This little girl just won an Oscar now that she is grown up.

Makes you wonder what she had to do to get there.

Also noted is the "dead look" eyes, like filtering out a bad past.

My thoughts are that these people who gain wealth and power, grow bored, and need ever increasing stimulation.    In typical sociopathic fashion, they care not about the damage they do, no guilt.   In fact, they often relish the damage, knowing that they can satify their power trips, and get away with it.   Hollywood and Politics fits this narrative perfectly.

Q is helping to expose some of these beasts.    Some of what they do is so off the charts, it is difficult for most people to even wrap their head around it, even entertain the idea as possible even for a moment.

Those three films you can find on YouTube. They all have Bill talking positively about pedophilia.
Bill Maher - I'm Swiss (2005)

Multiple pedophile comments Bill has made. Like his comment defending a pedophile who was 35 who was raping a 14 year old who Bill says they were younger when they started that they had "been in love." He full on defended child rape.
https://www.youtube.com/watch?v=ZdaORu1awQsYouTubeYouTubeYouTube

Bill Maher in the red shoes.
https://i.redd.it/ul561uiljjg11.pngPNG
It makes you wonder what Bills company really is. In all of these videos he condones pedophilia. Who names their company Kid Love Productions? Apparently Alex Jones called out Bill as well. Alot of people calling out Bill Maher Kid Love Productions. Regardless of your thoughts on Q and AJ we know something sick is going on with that company.
https://www.infowars.com/shock-video-bill-maher-openly-endorses-pedophilia-as-love/
Posted by Stock at 11:55 AM