Does anyone else understand the sick irony of this Mosque in Christchurch?
Did y'all see the wide MSM coverage on 120 Christians murdered by Muslims in Nigeria in the last 3 weeks?

Note that as you watch the shit show ensue, with calls for gun control in NZ and the US (Australia is already toast)  and as you watch the call for control or censoring of "dangerous channels" like 8chan......as you watch this play out.....Note the above graphic showing 120 Christians slaughter in Nigeria since February, and Nigeria is just the 12th worst Christian persecuting country. 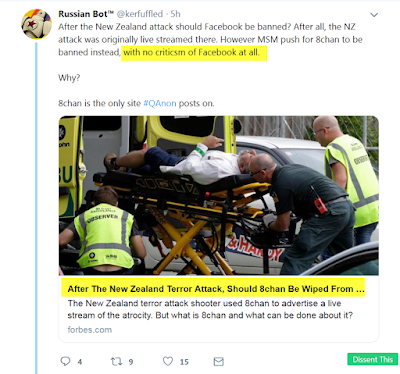 8chan is where much of "Q" is published.    Q is an enemy of the enemy, highly targeted now.
Dozens of media attacks against Q.   If you don't know know, get to know Q.

So Forbes wants 8chan, and Q, eliminated because 8chan "was used to advertise the attack".      Forbes says nothing about Facebook, where the attack was supposedly livestreamed.   It probably was, but Big Censor was quickly effective at wiping the net of coverage.

So Facebook is the "big offender" and gets nothing but praise for its quick censorship efforts.


After the New Zealand attack should Facebook be banned? After all, the NZ attack was originally live streamed there. However MSM push for 8chan to be banned instead, with no criticsm of Facebook at all.

Forbes is one of the worst offenders as enemy of the people.   In decades past, people thought of Forbes as a business minded, science and fact minded publication.   How far have they fallen!

Forbes got on my radar as a tool of evil when they heavily promoted Jim Conca, A total pimp for radiation overall, and the civilian nuclear energy debacle.   Search for Conca on this blog, you will find a dozen articles or more.

It is funny too, that an Australian didn't do an attack in Australia, I mean, logistically so much easier.

But that wouldn't advance the gun control narrative, because Australia already has Orwellian gun control.

BUT WHY IS IT SO IMPORTANT TO CENSOR THE SHOOTING VIDEO?    Meditate on that and let me know?

piratebay pretends to have a copy, but "that address isn't understood"
https://thepiratebay.asia/torrent/30694790/Christchurch-Mosque-Shooting-New-Zealand-FULL-VIDEO.mp4#

from Forbes, they are promoting the idea that if you use the words "traitor" or "invader" that you will be researched by investigators.     Wow.

“While this may make it harder for investigators to discover, it will also make it harder for folks susceptible to radicalization to find,” Pugh told Forbes. “Discussion of ‘traitors,’ ‘invaders,’ and needing to do something ‘in real life,’ or ‘IRL,’ are the watchwords for investigators trying to find a particular needle, not in a haystack, but in a stack of needles," he added.

The "manifesto" apparently cannot be found on the internet either.   Big Censor has become very effective. 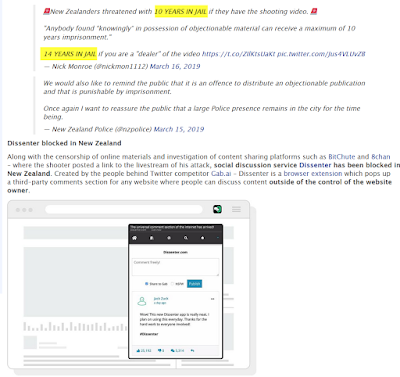 Apparently, possessing the video is now in NZ grounds for 10 to 14 years in jail.