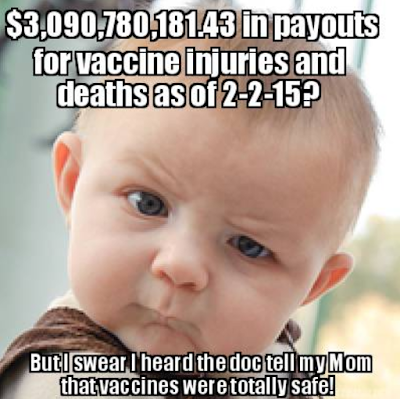 Vaccines are suspicious at least.    They are now being promoted heavily, along with "Fighting For
Climate Change".    They both are central tenants of governmental control.

So I did a bit of a dive.    It looks quite bad, anti-mercury-Vax seems appropriate.

April 2019....the push to push vaccines is obvious, even though open borders is even more obvious.

The latest meme is that Chicken Pox is dangerous because it is HERPES.   Oh they will play any card, no matter how cheap, false, or misleading.

Now Anti-Vax is a different question.    A deeper dive is needed, but any vaccine with Mercury of any sort is suspect.

The rates of use of vaccines and rate of increase of Autism have been linked.    Correlation is not causation, but sheesh, real Autism (not the Aspergers Spectrum which should not even be thrown into the same basket as Autism) is a pretty horrible thing, and extreme caution should be the tact.     Not the, in similar fashion to radiation caused morbidity "you can't prove it".

They have, and are still, putting Mercury into vaccines.    Apparently it functions as a preservative,
and I am amazed that "they" can't find something else that is known safe and effective at preserving?   It goes into other medical products too, and tattoo ink.

When Facebook side with the WHO, you see evil and evil aligned.   Fakebook says they will be "less prominent" that is the narrative for "we are censoring the heck of it".
https://www.digitaltrends.com/social-media/facebook-vaccine-hoaxes/

Anyone who doesn't understand just how evil the WHO is should read this article on how they control ALL the narrative on the dangers of Radiation.

My research indicates that vaccine abuse was much worse in the past, with young humans being injected with twice the legal limit of Mercury.

Mercury is a known nuero-toxin.     The other clear cut thing is that the FDA and the CDC failed horrendously in acting promptly to improve the situation.   Decades of feet dragging as our children are poisoned.

One of the ways that grant receiving scientist defend the use of Mercury, is they claim that Ethylmercury is not harmful, in comparison to Methylmercury.    Due to the "biological half life".

Others support my assertion --Ethylmercury "goes away" (biological half life as measured by hair or blood) faster because it gets in to do it's damage faster.      The WHO plays the half-life card, for those who understand how the WHO "manages" radiation information, the WHO's position is suspect.

This tendency may be evidence not of ethylmercury’s comparative safety, but of its greater danger if, as science has suggested, ethylmercury is not leaving the body but simply migrating more rapidly to the organs, including the brain.

Some studies indicate a wide variation in biological half life between people.   So what may be just

below the safety threshold for some people, might be 6 times over for others (189/35)

This article shows that Ethylmercury is not just a bad neurotoxin, but causes substantial DNA damage, many of a type that cannot be repaired "blunt ends".

A single Thimerosal-preserved flu vaccine contains 25 micrograms of ethylmercury. If the EPA RfD for ingested methylmercury is applied to this injected ethylmercury figure, an individual would have to weigh more than 250 kilograms (551 pounds) for the 25 microgram exposure to be considered safe. Young children are commonly given half-doses of Thimerosal-preserved flu shots nowadays, working out to approximately fourteen times a safe daily exposure for a 20-pound (9-kilogram) individual. Back in the 1990s, a two-month-old child could have received 62.5 micrograms from three vaccines in a single doctor’s visit. Assuming the child weighed about 5 kilograms (11 pounds), he or she would have received 125 times the EPA RfD for methylmercury. 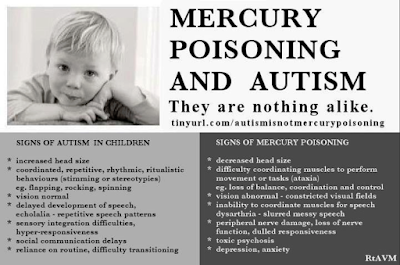 The pro-vaxers like to use a false argument, an invalid comparison.

This is like the nukists saying that because you didn't develop an immediate acute radiation reaction, that the morbidity you got 5 years later could not have been caused by radiation.

And another "meme" is that there is no increase in Autism, its just how we label it.    Does anyone believe this?   I am not saying that for vaccines are the primary cause of an increase in autism......but saying that there is NO INCREASE just seems absurd.    Nowadays, everyone knows someone who has a child with Autism, prior decades, I never had an interaction with anyone with a child with Autism for the first 35 years of my life.

Yeah right, like there is no increase in Thyroid cancer in Fukushima....its just "more inspection" which is bullshit. 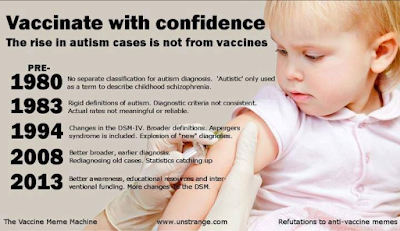 HPV Vaccine?    Majia did a nice article on that
http://majiasblog.blogspot.com/2016/06/framing-risks-from-hpv-vaccine.html

And more on vaccine safety
http://majiasblog.blogspot.com/2019/01/governing-vaccine-safety.html

My Opinion on autism and vaccinations:

I don't believe that vaccinations are the leading cause of autism. I believe, in some instances, vaccines may increase vulnerability or precipitate a cascading chain of adverse biological events. For example, in one case the US vaccine court concluded that vaccinations might have precipitated autism in a child who had an underlying mitochondrial disorder (see here).

That said, I don't believe vaccinations account for the majority of autism cases.

We live in a highly contaminated environment. Lead, mercury, arsenic, uranium, radiocesium, tritium, etc are in our air and our food. We have  been damaging our human genome by extracting and manufacturing these genotoxic elements in truly massive quantities for the last 150 years.

For me, "autism" can represent human diversity but,

MOST OF ALL, autism, ADHD, Parkinsons, cancer name the human symptoms of our ongoing and wholescale environmental destructio