Seems like they never got past that little 1776 thing.   Even in 1812, British Soldiers were in Washington, literally burning down the White House.

I guess Michelle Obama's horrible experience of having to live in a house "built by slaves" must have been built after that. 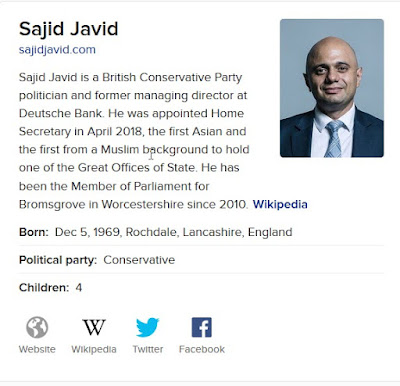 visited Britain last week and met with their Muslim "Home Secretary".    Was this trip a contributor to her demise?   And why does Britain have a Muslim Asian as head of their "homeland security"?

Nielsen will later hold a bilateral meeting with UK Home Secretary Sajid Javid to advance transatlantic collaboration against an array of security threats. While in London, she will also confer with top UK counter-terrorism and cybersecurity officials on sensitive matters and efforts to stay ahead of common enemies.

And she specifically met with Sweden's minister of Home Affairs.  You know Sweden, the migrant rape capital of Europe.

Nielsen oversaw a crisis team for Katrina debacle under Bush.   And lately, she has concealed that her department has expanded the "catch and release" program, flooding USA with illegal immigrants.

Nielsen was "Secretary" of DHS.    A confusing title, she was the top dog at DHS with a budget of $41B.   And under her leadership, our borders have been porous.   See video interview at bottom.   I was never impressed with her "leadership" she seemed like a blond swamp critter, at least part of the administration nation.   She is a lawyer, so familiar with many weasel words.

She was a "cyber-security expert".      Hmmm, that is Nellie Ohr's specialty too, who used spousal privilege to avoid testifying against her Husband Bruce Ohr, all part of the treasonous coup that we are now unwinding.

I encourage wide dissemination of the narratives developed by the following independent reporters working the overthrow Trump beat. Query their names in YouTube. Sample their reports. Look for other journalists who are also engaged in this reveal.

They are using Youtube to provide timely info access minus the mainstream media’s smokescreen. For many, much of the material will be surprising and 180 degrees off the MSM’s drumbeat: Trump bad, Democratic Party good.

Thanks to the mainstream media’s biased reporting most Americans have yet to learn their names or the details of their investigations. There are Russian and Ukrainian characters involved but not in the ways the MSM would have you believe. Nor has the MSM reported about the British Crown’s efforts to remove Trump.

Making U-turns is no fun and often dangerous. However, when you wake from a hallucination and realize how far off the trail you’ve drifted, radical corrections are in order.

This is as serious as cancer. Heads up!

Nielsen, around 43 minutes, answers question from narrative shifting POS "journalist", who says "at first I thought Trump was talking about a wall as just a metaphor, so you (Nielsen)think that he is actually talking about a physical wall"?

stock here, LOL, or is he talking about a "fake wall" in which Mexico et al can still flood the USA with the worst of their rejects.

Nielsen responds in weasel fashion with "we need a wall 'system'", and the misdirection of "people can disappear into urban environments in either direction.     Implying?   That US citizens are illegally entering into Mexico and disappearing into their urban environments.