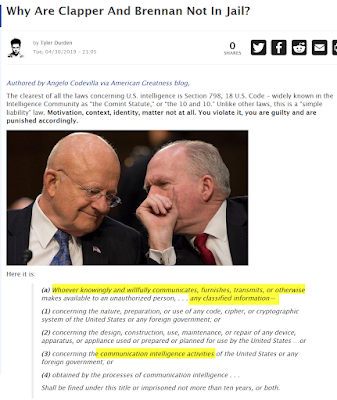 
During the Civil War, Samuel A. Mudd was a surgeon and tobacco farmer in southern Maryland, a hotbed of Confederate sympathy. Thirty-one years old, with reddish hair, Mudd and his wife Sarah had four young children and a brand-new house when John Wilkes Booth, on the run after assassinating Abraham Lincoln, came to his farm needing medical help in the early morning hours of April 15, 1865. Though Mudd proclaimed his innocence in the assassination plot, testimony during his trial for conspiracy revealed that he had met Booth at least once prior to the murder, and setting Booth’s broken leg did him no favors. His fate sealed, Mudd received a life sentence in federal prison.

Hayden, Clapper, Phil Mudd, all of these showed political bias. Trump was right, and history, will show, these crooks were dangerous men. Plotters that wanted to see him removed by illegal abuses of their craft. Phill Mudd said on live tv '“You’ve been around for 13 months. We've been around since 1908. I know how this game is going to be played. We're going to win". A clear threat to Trump


I love watching this fool (MSNBC Nicole Wallace) moderate. She will need reminded in just a few weeks why Trump went after the FBI when the report on Comey comes out. There were rogues who were totally abusing the system against Trump. How and why would our intel community give political opposition research companies access to our surveillance systems? It's coming out and FusionGPS was one of them. Rogers told the FISA court judge and they watched these people and they are busted


Mudd, 123, you must watch carefully if Trump changes anyone in government
[–] 18342319? 0 points (+0|-0) 4.5 minutes ago
120 hayden The president is a result of a push towards a post truth reality.
that is why Trump got elected, he recognized that people no longer needed truth
[–] 18342281? 0 points (+0|-0) 7 minutes ago
117 Hayden, we must tell truth to power, we have to adjust how we talk to Trump, but the speed bump HERE IS MASSIVE compared to past presidents. We don't tell him bad stuff right away, because we are scared that he doesn't like unwelcome news...... Trumps attitude towards intelligence is DESTRUCTIVE to his presidency.
[–] 18342229? 0 points (+0|-0) 12 minutes ago  (edited 12 minutes ago)
Phil Mudd is spreading disinformation...listen to him about the "Civil War" at https://youtu.be/dMz6hEzUxFs?t=4011YouTube of the video. He attributes Antifa and Black Lives Matters are Russian instigations to foment Civil War.
Really??
[–] 18342228? 0 points (+0|-0) 12 minutes ago
PS no offense to chicks, the moderator is a brain dead bitch
[–] 18342225? 0 points (+0|-0) 13 minutes ago
chick 109, what did we do wrong, are there any narrative that are wrong
Admiral Rogers - Trump approaches things from a totally different manner. What concerns me is that our institutions are under attack.
--------------------stock here note that he does not state that the institutions do not totally deserve to be under attack. chick - Trump is the attacker AR- It is much broader than 1 person Is the dialogue in the Rural areas so different, and it is.....
[–] 18342178? 0 points (+0|-0) 16 minutes ago
Mudd at 107 Look at what Russians have done....selling discord at a profound level, Antifa, Blacklives matter, he (Putin) is trying to create a civil war in American, and not having black kids shot because we have to get past the racial divide.
Trump saves a White supremacist equates to a Black activist.
The emails I get show that people in this country HATE each other, and that is what Putin is pushing.
[–] 18342116? 0 points (+0|-0) 22 minutes ago
103 chick to hayden, where are we at Hayden I been out of government 10 years, I think I still have my pension.......
we need to do more than take their pensions, some we take their freedom, some we take their bank accounts too, some we hang in a public square after due process of course.
[–] 18342085? 0 points (+0|-0) 28 minutes ago
Most sitting on this panel (except Admiral Rodgers) are Traitors to the United States of America, and are not upholding their sworn oath to the constitution of these United States of America... 'We the People' elected Donald Trump to the office of the Presidency. They want to subvert all of our votes... NOT ON OUR WATCH!! WWG1WGA!!
[–] 18342078? 0 points (+0|-0) 29 minutes ago
100 in Chick-- Do you think Russia influenced the election Clapper Absolutely
[–] 18342034? 0 points (+0|-0) 31 minutes ago  (edited 31 minutes ago)
Coup d'etat. Etat = state. A blow to the state.
Sorry: I'm a french speaker.
[–] 18341859? 0 points (+0|-0) 41 minutes ago
Mudd is full of shit. He pins Antifa and Black Lives Matter to Russia. We know it is Soros funding and organising these groups. Mudd is a deep-state operative pushing their narrative.
[–] 18342040? 0 points (+0|-0) 31 minutes ago
Total deep stater......didn't have him on my list of criminals, but he is there now!
[–] 18341566? 0 points (+0|-0) 49 minutes ago
54 min...chick .Is Mueller doing a noble thing?
Michael Rogers--its a positive, necessary thing
[–] 18341540? 0 points (+0|-0) 50 minutes ago
I watched and listened and personally didn't see any remarkable body language changing. What I did finally hear, which shows astounding ignorance, is the thought that Russia is behind Black Lives Matter and Antifa. Soros must be delighted! The whole foundation of their analysis abut Russia is flawed. How will they and their cable cronies ever resolve the Clinton-Mueller collaboration with Russia when the time comes?
[–] 18341531? 0 points (+0|-0) 51 minutes ago
Is justice impartial in this country
Phil Mudd
The president is leading the American people to believe that institutions of state are corrupt? 50 min Hayden, with no knowledge, and no data ------- I think there is more there, there, than I thought there was 6 12 18 months ago. chick--on both the obstruction and collusion? ya End by summer of 2018, its gone on longer, end in a national Rorschach test, a cloud where no one changes their opinion
I think Phil's instincts are mine.
Again my instinct no data, is the President is frightened and desperate
Indictment of the 13 Russians....from GRU was establishing the predicate for an American criminal act..... chick....someone from the Trump campaign? yes


Trump will embrace long term destructive actions against institutions of the USA.

stock here - fucking A yeah, we are still dreamers........
Hayden, Clapper, Phil Mudd, all of these showed political bias. Trump was right, and history, will show, these crooks were dangerous men. Plotters that wanted to see him removed by illegal abuses of their craft. Phill Mudd said on live tv '“You’ve been around for 13 months. We've been around since 1908. I know how this game is going to be played. We're going to win". A clear threat to Trump﻿
I don't care what he did with Stormy Daniels..... (nice pot shot there big boy)
[–] 18341603? 0 points (+0|-0) 48 minutes ago
The 13 trolls were later shown to be completely ineffective, spending 100,000 on facebook ads that pretty much no one saw, and no prosecution could come.
[–] 18341333? 0 points (+0|-0) 1.1 hours ago
Chick--what is your degree of alarm about Russia, 43 min
Clapper -- horrific actions by Russians, and they DID change the outcome of the election...... Galvanize americans about the profound threat of the Russians
[–] 18341300? 0 points (+0|-0) 1.1 hours ago
around 42 min in Clapper, is my continued silence, over respect for the office.
In an emergency, break glass, for "our tribe", after praising Brennan for his highly personal attacks on Trump
Posted by Stock at 3:55 PM