Plastic -- Take Effective Actions -- Do We Damage Ourselves, Whilst Letting China do 10 Times More Earth Damage?

USA "contributes" only 0.6% of all the plastic into the world's oceans, and straws are 0.02% of "our" contribution.   Focus on shit that really matters, y'all SJW.
http://www.nukepro.net/2019/04/plastic-take-effective-actions.html 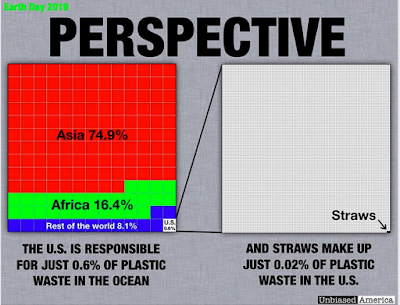 For a few years, I have been "aware" that 70% of all ocean plastics come from 2 rivers in Asia.

"Aware" meaning that I have not fully vetted the statistic, but it seemed credible at the time.

Apparently, the USA is responsible for only 0.6% of all the plastic that goes into the ocean.

I agree with using less plastic.    In Hawaii, instead of individual water bottles, I buy RO and mineralized water at 6 gallons for $3.00.

And for drinking water in the truck, I use the small bottles, but often refill them unless sanitation is questionable.

But the whole "straw" thing is another vastly stupid social justice warrior distraction, from shit that really matters.

We shall see that the real enemies to America are the socialist/communists, with much of the power faction being in China.    And to cripple ourselves whilst letting that beast run amok, is just short of insanity, some type of mental illness.   We have been taught to hate ourselves, punish ourselves.


“The climate is changing. CO2 is one of several important factors in that change. There is uncertainty as to how far these changes will propagate if we continue to add CO2 to the atmosphere, but the direction is clear. There is also uncertainty as to the impacts on human life, but the evidence is that the negatives outweigh the positives. The more the world can shift to renewable energy, the safer we will be. But this requires world cooperation, especially from China, and the small efforts made by the State of California are an effort in futility as long as China is allowed to run amok.”

All of this makes it clear that tiny, invisible plastic dust is becoming ubiquitous on our planet. We're only just starting to understand what the effects of that will be.