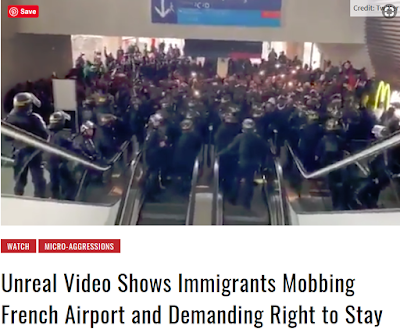 stock here, seen this on VOAT

Interestingly enough, while fact check this story, I came across this other story on how

DNA tests revealed that 30% of all immigrant adults arriving at the southern border with children were not related to the children, according to a Saturday Washington Examiner report.
The tests, part of a pilot program being tried out by Immigration and Customs Enforcement, were used for only a few days earlier this month in McAllen and El Paso, Texas. According to an immigration official who spoke to the Examiner on condition of anonymity, the tests are meant to deter the growing number of migrants who lie about the children traveling with them at the border.

Strategy, extract them with an over whelming force, but immediately introduce them to public aid workers.    Separate them into different rooms and buildings, stay away from jails.

Interview them in order to see what kind of public services they need for themselves and their family.   Go with an escort to check out their living conditions.     Let them know that by providing a DNA sample is the first step in getting paper that they may deserve.    Process all the DNA samples of everyone in the household.   For their safety, keep them under escort while their paperwork is processing.    Make sure to get a detailed history of their work skills, education, and various languages that they speaks and what countries they visited and were from.

Still under safety escort process the DNA of everyone in the residence.    Of course, you already got them to describe their family relationships so that proper services and papers can be arranged.    Get them to introduce other family members who live separately, even in other countries in EU,

Now its hammer time.    Those who were lying about family blood relationships shall be prosecuted for kidnapping.   Investigate any other crimes they are suspected of via an extensive review of crime video.   Charge them all with disturbing the peace, disorderly conduct.   Charge them for the costs of their escorts and removal from the airport.

See if tribunals for enemy combatants can be used in France, or similar.   Convict them and levy fines.   Establish long jail sentences.

Start throwing some of them into jails, in far off places, away from the rest of the family.   let them talk to and report what is happening to them.   Encourage other prisoners to make it hard on them, get the word out that jail sucks.

Give the other ones "in process" the option to pay for their own transportation back to their home country.   France can front the cost of the transportation, but it is put on "their tab" with usury (they will hate that, but their choice is to go to a tough jail)    Their un-"escorted" females, if any, who have employable skills may be allowed to stay, based on a societal benefit test which almost none will pass.

Almost all will take the re-migrate option.   Let them know their "tab" and that if they re-enter any EU country which joins the FRANCE French Re-migration And No Chance Entry agreement that they will be liable for their original jail sentence, which will be commuted into labor camps to juice it even more.    Vive la France!
Posted by Stock at 10:37 AM