Another US Nuke Plant is Dead! Activism and Economics is Killing These Plants 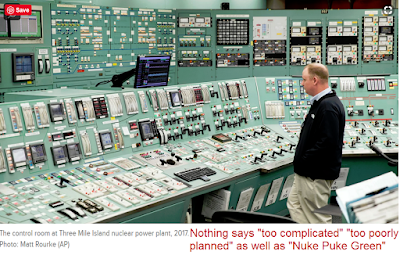 They tried to extort the government to hand them money, so they could keep fighting carbon.

The lies of the "small modular reactor" are a ridiculous falsehood, staring the realities of the dis-economies of scale in the face.

NPR (National Public Radio) is a tool of the Globalists, and funded with your tax dollars.   They are nearly always on the wrong side of the "argument".

The last remaining reactor in operation at Pennsylvania’s Three Mile Island nuclear power plant—the site of the most serious nuclear accident in U.S. history in 1979—is set to close by Sept. 30, 2019, NPR reported on Wednesday.

Generating Station Unit 1, which was not involved in the infamous partial meltdown of reactor number 2 and a subsequent radiation leak 40 years ago, is still up and running and licensed to operate until 2034. However, the plant’s operator Exelon said in a statement on Wednesday that the money-losing facility is no longer tenable following a failure to obtain subsidies from the Pennsylvania legislature. Those subsidies, NPR reported earlier this year, were touted by the company as a way to preserve a source of carbon-free power in the age of climate change.