DocGreenHeart was and is an excellent anti-nuclear writer and researcher.     He does it from a Lefty point of view, which becomes obvious.

He has a good article on how each Nuclear Plant and spent fuel is like 72,000 nuclear bombs just waiting to go off.    Each plant creates a nuclear bomb worth of radiation each day it operates.    What if the world knew that?    What if terrorists knew that?    Rational actors would probably see that blowing up a spent fuel pool could be a game over for all human.   Terrorists are not rational actors.

This is a "news site" that I really like.     It's Mandy's site as the "Body Language Ghost".    She covers politics, "entertainment".    She covers the Avengers here.
AND IMPORTANT, try to watch videos on sites OTHER THAN YouTube.    Depower YouTube whenever you can, try.

One of his picks found way below is Truthout, check out their article on 10 Good things happening in 2015

List Of Best Global Unbiased Independent True Journalism News Sources, Winners Of 2015 Dr Goodheart Approval Award
There is a war going on for people's minds, hearts and souls. Within the mass media, losing is winning, war is peace, hate is love, fear is kindness, bombing is security, regime change or assassination is democracy, fiat paper is money, and denial is reality. Destroying the environment is good for the GDP, and thus moral and ethical. All of these things together are known as Catch 22.
In a time of universal deceit - telling the truth is a revolutionary act." - George Orwell
Humanity is being lost because the corporate controlled mass media just does not care enough about telling the truth or informing people about real core issues, because profits come first and nothing else matters. Advertisers, producers and boards pressure shows and news reporters to 'conform' to corporate advertiser wishes.
What the corporations want is what shows up on mass media, but nothing else does. The huge void left over after corporations get what they want and nothing else is what is destroying not just the world, but democracy, freedom, sustainable choices, and more all around the world.

WHY THE MASS MEDIA IS NOT FREE,  AND WHY INVESTIGATIVE JOURNALISTIC IS NOT WELCOME IN AMERICA ANY LONGER

Why is much of the mass media more like the National Enquirer, than a true journalistic source of information?
Fake Mass Media News; The Many Ways The Viewing Public Is 'Programmed' And TV, Radio, Newspaper News Programming Is Censored, FOX News Fair And Balanced? Legacy Of President Ronald Reagan - Fairness Doctrine, Killing Unions, Trickle Down Economics, Phil Donahue Fired

https://www.agreenroadjournal.com/2012/04/fake-news-one-of-many-ways-programming.html
Investigative Journalism Is Obsolete, Corporate Muckraking Being Abolished By Mass Media, Humorists/Comedians Are Now The Only Remaining Investigators, But They Don't Really Investigate Much Of Anything Contrary To Huge Corporate Interests 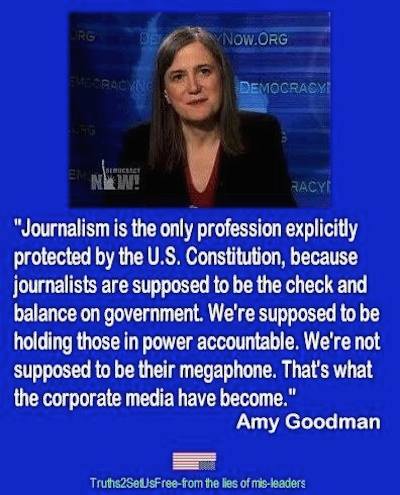 www.democracynow.org
@AmyGoodman nailed the constitutional basis for our expectation of journalism as watch dog rather than lap dog. Your thoughts?
Image thanks to Truths2SetUsFree. 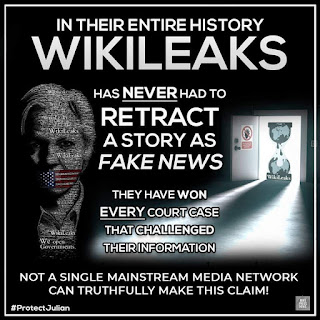 Brave whistle blowing journalists like Abby Martin and Julian Assange talk about the 6 corporations  that control nearly everything in the mainstream media.


For more details on this monopolization of the mass media, click on....


Bill Moyers And Bernie Sanders; Why Huge Corporate Owned Media Shouldn’t Get Bigger, Why The Press Is Only Free In The US For Matters That Do Not Involve Threats To Huge Corporate Profits
https://www.agreenroadjournal.com/2016/05/bill-moyers-and-bernie-sanders-why-big.html

For exposing government corruption, deception and fraud, Wikileaks gets the Dr Goodheart seal of approval.

There are some smaller media that rely on true journalistic methods and truth seeking. The following independent media sources are winners of the Dr. Goodheart Seal Of Approval as of July 2015, because they do not toe the corporate line or bow to corporate pressure to 'conform' to the pro 1% world view. 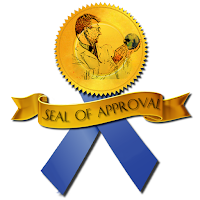