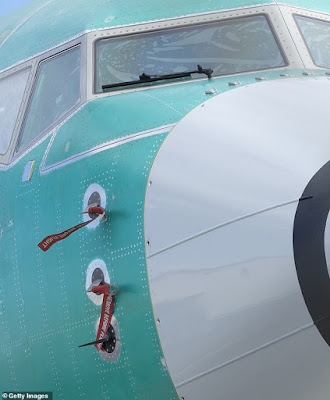 stock here -- just a short note here, but important.     As a pilot and mechanical engineer and pretty
good at control systems, I understand the issues with the Boeing 737 Max crashes.

Bottom line -- Boeing is guilty of manslaughter, they will be penalized, but they will also be protected by the Trump admin, as they are BIG Business, and Trump loves selling American planes to other countries.

After the first crash, the radar data, and black box data, if released to the public, would make it more than obvious that it was an out of control MCAS system and sensor(s) as the root problem.

Very early on, while the first crash was news, but before any real discussion on the news....was still far away, on VOAT, an experienced pilot logged  in and registered his opinion, that it was the larger engines without other structural changes that caused a more unstable aircraft, which also relied on AOA (not to be confused with AOC instability) Angle of Attack sensors, to not just alert the pilot of a "nose too high" risk of stall and spin, but the system could also override the pilots manual input to control the plane.


The 2 crashes were 4 months apart.   After the 1st crash pilots in the USA did not even know that the system that caused the first crash, was even on their airplane.

So much for the "Proper US training could resolve the situation".

Boeing should have immediately issued an alert about this system, and offered an immediate free "upgrade" to the MCAS control system that was pushing the nose way down.   I mean, if that notice and offer took more than a week, I would find the responsible individuals guilty of negligent manslaughter.

But Boeing kept with the "improving the software" approach, head in the sand, resulting in many horrible deaths.    In fact, just yesterday, they issued an "we are all clear" it's up to the regulators now.

Government oversight is also pimping the idea that "training" was the root cause.   Probably just so they can avoid egg on their face, or worse.     Willing to risk lives.