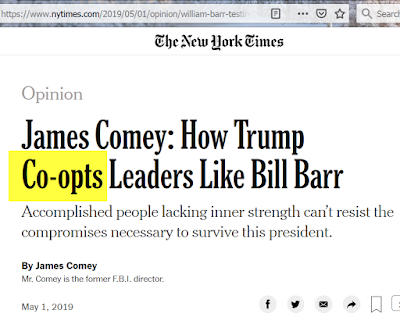 Funny now how Comey has adopted a phrase I have been using for years now, and it didnt seem to
get much traction, but I think it describes the situation nicely.   Co-opting.   How to take over a former group that had a real purpose, and mold it to be a tool for the more powerful agenda.

As in the Liberal cause  has been co-opted by NWO (open borders, late abortion, LGBTQ, illegals voting in our elections)


You can’t say this out loud — maybe not even to your family — but in a time of emergency, with the nation led by a deeply unethical person, this will be your contribution, your personal sacrifice for America. You are smarter than Donald Trump, and you are playing a long game for your country, so you can pull it off where lesser leaders have failed and gotten fired by tweet.

Join Jamelle Bouie as he shines a light on overlooked writing, culture and ideas from around the internet.


Of course, to stay, you must be seen as on his team, so you make further compromises. You use his language, praise his leadership, tout his commitment to values.
And then you are lost. He has eaten your soul.

Comey wants to protect "Institutions we hold dear", but in fact he is really referring just to the CIA and their Lapdogs the FBI.


But his outrageous conduct convinces you that you simply must stay, to preserve and protect the people and institutions and values you hold dear.

Baker was the FBI's top lawyer from 2014 to 2018-- He was responsible for letting HRC off the hook, among other people also pulling those strings.

Baker made the statement that he thought that Russia had directed Trump to fire Comey.    Seriously.

Sessions said in a statement that McCabe was let go for “lacking candor under oath” in misleading investigators about the fact that he authorized a conversation between FBI employees and The Wall Street Journal.

Baker was fired 26 hours prior to being able to collect a nice pensions on the backs of working americans.     I remember that day, it was a great one.

And here, showing great hope, is our freshmen Congress-peeps AOC