Common Drugs, Tylenol, Leads to Abuse Via Lack of Empathy 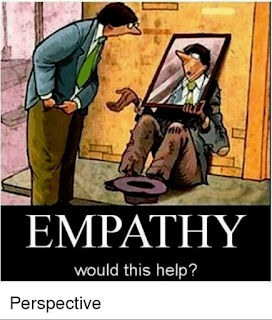 The day after I wrote this, Majia reviewed an article about Tech/Social Media and an increase in Narcissism.

She also brings up the predictive concept of Algorithmic Governmentality.      A control and censor type of thing, methinks, without reading into it.   But it's a great concept, one that we should keep a watchful eye on.


He then links the impaired empathy to an increase in abuse by Government, as well as societal violence.   Is something different now?    Duh.

I will do an article at some point, but the test results are in, and CBD oil is an excellent anti-inflammatory (almost always occurs with pain too).   Direct applied as a paste, or taken with food.

Why can't we get back to a natural plant, and replace 40% of ALL the Big Pharma drugs, including the over the counter.

I normally think that Astrology can be a positive influence in one's life, if for no other reason than its give an opportunity to look at things differently, create a goal, pursue an opportunity, recognize a short coming.    So I thought this Dark triad meme in blue background was also interesting. 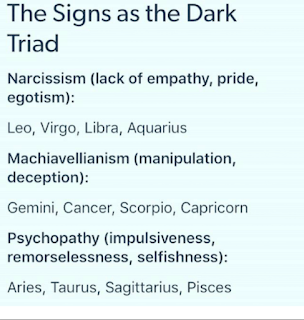 In America, the City of Chicago, IL operates a scam that steals millions of dollars in false fees and auction sales related to residents’ impounded vehicles. The same jurisdiction boasts the highest rate of murder in the world. Sanctions under color of law and person-on-person violence exist on a spectrum of behavior.

Connecting the links suggests solutions to both official lawlessness and street violence. Fueled by personal resentment over material wealth’s inability to satisfy deeper needs, city bureaucrats and the people they serve feed on each other.


Incredibly, Tylenol, the OTC pain med, drives the behavior. Among many, it is a popular pain formula. Nationally, it’s estimated that 25 percent of Americans use pain meds weekly. Its active agent is acetaminophen and is found in other brands. Research shows acetaminophen reduces empathy for people’s suffering. Muscle and headaches may be reduced or eliminated but so is the user's connection to other people. Consider the implications, year in, year out.