When leftists control the media, the country will shift left.    And that is exactly what the Globalists want.

Time for a Digital Bill Of Rights, Comments by Paul Joseph Watson ~ VIDEO

USA – -(AmmoLand.com)-  Thank you, Mr. President. Very cool. But wild tweets are nice. We need action. A handful of giant corporations have seized control of the new public square and are digitally disappearing dissidents.
The first rule of Facebook is don’t talk about anyone who Mark Zuckerberg doesn’t like. Otherwise, you’ll be banned by Facebook. This isn’t a joke. It’s literally their new policy. They’re not just banning people they’re dictating the opinions that everyone on the platform is allowed to have. Merely appearing in a photo or a video with someone who Mark Zuckerberg doesn’t like is now enough to get you banned. This is virtually identical to the communist Chinese social credit score system. But instead, it’s controlled by giant corporations with more power than some countries accept at least in China it’s written down, so you know how to stay in compliance.


Tucker Carlson reports “How dangerous is Infowars. Well Facebook believes it’s so dangerous that you can be banned from using the platform. Facebook just for sharing its content unless you simultaneously denounce it. But let that penetrate for just one moment think about it just for a second. Mark Zuckerberg is not simply censoring opinions he’s prescribing which political opinions you’re allowed to have. Which conversations all of us in this country can have about America. Keep in mind that nobody voted for Mark Zuckerberg. He’s 34 years old. He’s completely cut off from reality. He’s worth 72 billion dollars and yet he can single-handedly make our First Amendment irrelevant after 250 years.”


I mean how tragic is it that Snoop Dogg who encouraged his 32 million followers to float Facebook and Instagram with Lewis Farrakhan videos has a better grasp of the principle of freedom of speech than 90 percent of journalists. The same journalists who whine about Trump targeting the media then pop champagne corks when anyone on the right gets silence. This has nothing to do with hate. Whatever that means. This is about you beginning to lose the argument culturally and politically. So instead of trying to engage on a level playing field and I don’t know actually doing some work you merely silence the dissent. This is classic authoritarianism.


I want them to shut down; I want them silenced.
This is the rhetoric of authoritarian tyrants, yet we are the dangerous ones. Really. This isn’t a private company and enforcing it’s arbitrary and ever-changing rules. Virtually every prominent online personality who helped get Trump elected has now been banned on some or all social media platforms. Do you think that’s a coincidence or is it a political purge? Oh and isn’t it great how Facebook has banned all these dangerous extremists while still leaving people free to surf Hamas and Hezbollah pages. Facebook is the establishment and knows popular dissent is keeping establishment candidates out of office. 2016 was the turning point and showed that an anti-establishment figure like Trump could win. So they are silencing populist voices ahead of the 2020 [election]. Here’s what needs to happen. Platform access should be a civil right for all citizens in all countries.
Digital Bill Of Rights 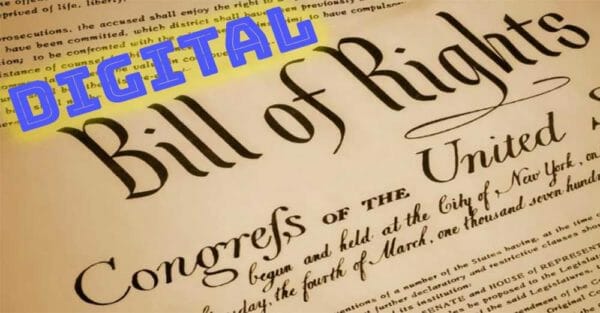 Digital Bill Of Rights
We need a digital bill of rights. Social media is the digital public square. The only circumstance for banning someone from the digital public square should be if they abuse that public square to post something criminal or an immediate incitement to violence. In coordination with this Facebook and every other big tech firm which fails to live up to this new standard should have its legal immunity under Section 230 of the Communications Act stripped. Facebook no longer acts as a platform. It acts as a publisher. If Facebook wants to be a publisher, it can be a publisher. Which would mean that Facebook would be personally and legally liable for everything posted on their website. Facebook is clearly putting themselves on one side of the political debate. They’re entitled to do that as a private company, but if they do want to do that, then they need to be regulated as a political actor. If you ban a bunch of people for partisan reasons in the midst of a presidential campaign season that is election meddling.

I’m sorry I forgot. We’re only supposed to care about election meddling when a few Russians buy some Facebook ads. And please just shut up with the “no a private company can do what it likes” crap. When people start losing their bank accounts and credit cards because they had the wrong political opinions, which is already happening when people cannot buy and sell because they have the wrong political opinions. Sorry. Your Amazon smart refrigerator has denied you access to your groceries due to you visiting Infowars.com. When people are homeless and destitute because they can’t get mortgages and they can’t get loans because they have the wrong political opinions are you still going to gleefully repeat the mantra more private company. How about medical care. That’s a private practice. Should we deny people medical care because they have the wrong political opinions. It was wrong for black people to be denied services by businesses and it’s wrong for everyone to be denied service by social media companies under the law. Businesses don’t have the right to discriminate against people’s political views. They don’t have the right to deny service. As the ACLU points out once the business decides to advertise its services to the public at large, it gives up the prerogative to pick and choose which customers to serve. Even when that commercial service involves some form of speech or expression, that’s already the law. So why is it not being applied to Silicon Valley giants?
As Wilt Chamberlain writes. “When private companies violate civil rights we pass laws to stop them from doing so.”
So while the tweets are nice and the support has been incredible, we need action. And it really does seem like this is our last chance
Posted by Stock at 12:42 PM