I received a phone "poll" yesterday.   It hit me shortly after, the real purpose of the "poll".   The Dems
are running scared that illegal use of spying, to intentionally subvert the elections of the USA, and that charges, up to treason, will be coming.

The Poll is a setup to sway people into thinking of the Mueller Report as a False Dichotomy.   I assume they would target conservatives, in their attempt to "program a response".

The Poll "After Consideration of The Mueller Report", do you think that: 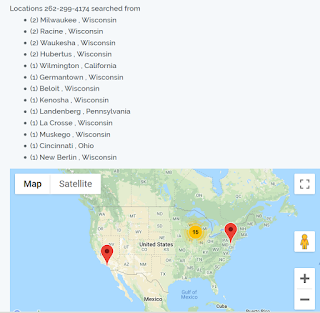 1) Charges should be brought against the President?
2) or, the Whole Thing should be dropped

I haven't read any of it.   400 plus pages really doesn't fit my schedule.

There are more options than just 2.

Could now, this punishment of Barr, the attorney general, and the first one willing to look into the illegal spying to support election interference, be an additional Obstruction?

I mean, the jig is up, as one politician said.    They will become more and more desperate, and are already planning false flags.   They may even have  to blow a dam or something to distract the nation.

The robo-call came from
https://www.whoisthatnumber.com/phonenumber/262-299-4174

And in the graphic, it shows 17 people were curious enough about this call to try to track it.    A grouping of data seems to show Allenton, which is a small town on the way to Beaver Dam (famous for the Must Ski's ski team, and the Beaver Dam pepper which is a superbly flavored large pepper of medium heat),

A false dichotomy or false dilemma occurs when an argument presents two options and ignores, either purposefully or out of ignorance, other alternatives.
In general, a false dichotomy gives the impression that the two opposite options are mutually exclusive (that is, only one of them may be the case, never both) and that at least one of them is true, that is, they represent all of the possible options