Short of throwing lead down range, we need to try to reign in the Criminals That Be with all legal means possible.     Use the FARA Act!

Now that we have a DOJ with patriotic leadership, there is a  chance it can work.    Today I hear 94,000 sealed court proceedings, some of which are indictments.

Clearly, when I think about the coordinated, NWO agenda that is pimped out on CNN, ABC, MSNBC, and the other "specialty" media such as Center for American Progress
which was formed by none other than John Podesta, I clearly think of what they are doing as a crime.

Do you see it that way?

So how can we slap them back?   It's a slippery slope, any restriction on free speech could snow ball into something horrible.    But under FARA, there is a restriction on "free speech", quite simply that if you are projecting the views and wills of a foreign agent, be it country, corporation, foundation, and you don't tell the USA that you are doing so, the person involved has lost (or never had) any "Freedom of Speech".

But today, I need to keep this article short.   I just want to present the idea.    And encourage you to email or call the DOJ and report CNN, and probably we need to point at specific people at CNN, and others.    Short because........


It's the first "nice day" in Wisconsin in weeks.    The green house has it's automatic heat release roof panel flying open early in the morning.   Plants love heat, not just sun, but heat.    They are like cold blooded reptiles...everything flows better with heat, really up to 110F doesn't seem to be a problem.    But that aside....I need to get to work on all things vegetable, herb, and prairie.    I have much automated infrastructure and pro-grade weed mat that will allow me to produce organically, and without even being around for up to 1 month methinks. 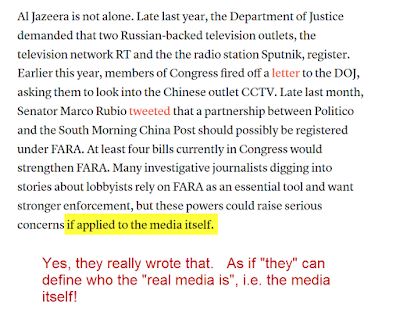 "The Voice of Journalism" makes a startling claim:


In invoking FARA, Congress is relying on a notoriously opaque unit within the Department of Justice to draw an impossible line between propaganda and journalism.

Yes, that claim from Columbia Journalism Review.   It is impossible to tell propaganda from journalism.   There, all done, fixed that, keep the FARA dogs off of the establishment media.

Once I got on this trail, the above was exactly what I expected to find.    A pushback, the strongest pushbacks coming the biggest criminals that be.

In fact lil' Butina getting 18 months in jail for hob-nobbing with the NRA, FARA has been in the news quite a bit.    Manafort was actually guilty, as well as tax evasion.   But Butina just "needed a sentence" to continue the Russia Russia Russia propaganda, I mean "news"

Butina - Clarify -- She not not actually charged under FARA USC 611.   She was charged under USC 951 which is "Agent of a Foreign Government".     Clearly this was used to further the "Russia Narrative".


If you believe an individual or entity is violating FARA or has an obligation to register, please contact the FARA Unit:
Because investigations are confidential, the FARA Unit cannot provide updates on submissions it has received.


The criminals that be will refer to Item D  of 22 USC 611, Definitions which excludes news organizations which are properly registered.    Ah, let's slap back the lies right now.....You only get this exception "none of it's policies are determined by any foreign principal".

(d) The term "agent of a foreign principal" does not include any news or press service or association organized under the laws of the United States or of any State or other place subject to the jurisdiction of the United States, or any newspaper, magazine, periodical, or other publication for which there is on file with the United States Postal Service information in compliance with section 3611 of Title 39, published in the United States, solely by virtue of any bona fide news or journalistic activities, including the solicitation or acceptance of advertisements, subscriptions, or other compensation therefor, so long as it is at least 80 per centum beneficially owned by, and its officers and directors, if any, are citizens of the United States, and such news or press service or association, newspaper, magazine, periodical, or other publication, is not owned, directed, supervised, controlled, subsidized, or financed, and none of its policies are determined by any foreign principal defined in subsection (b) of this section, or by any agent of a foreign principal required to register under this subchapter;