The Deep State of California, Leftists, Ready to Launch Armed Attacks On The Populace, Should The Arrests Start 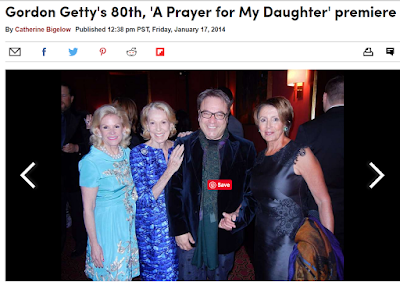 Let me start at the punchline.   This largest effort seizure of guns is tied into Gordon Getty, Nancy
Pelosi, and Kamala Harris.

I made a prediction a few weeks back, that the Deep State would start using false flags, even 2 per day, to either:

1) Distract from the real issues at hand, including DSers being arrested on treason and other charges.

2) Warn the Government that if arrests start happening, that financed armed attacks will start occurring all over.   Cali to start, maybe 500 armed paid mercenaries (they will call them "patriots") in riots and
shootings to protest King Donald from arresting the true patriots.

So I was on this seizure of over 1000 weapons thing, that was getting little press coverage, except to spin it the other way "Look how dangerous guns are!"


The Getty's are a powerful force in California.    The weapons were seized at the house of Cynthia Beck, the mistress of Gordon Getty.

Don't believe that?    Getty admitted it openly, he has 3 children with Cynthia Beck.

Here is a good source for more information
https://centipedenation.com/analysis-and-reports/watch-california-the-quiet-take-down-of-the-red-rat-lines/?ref=voat

"Law enforcement sources told TMZ, Saenz, 57, held at gunpoint a team of house cleaners back in 2017 after discovering them at a Malibu property owned by his longtime companion, Cynthia Beck."

stock here----I guess he didn't want them finding that stash of guns, put together probably from buying from Pawn shops and such at great prices.    And for use  in a "resist Trump" army of mercenaries, it would look far better than say using all AK 47s, LOL.
Posted by Stock at 8:25 PM