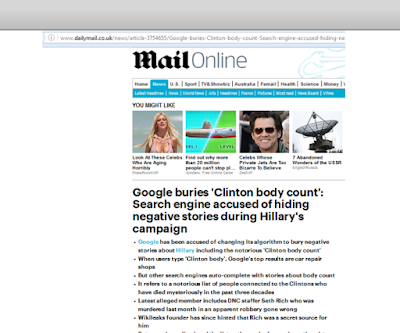 No cause of death was announced, no indication that he had been battling any disease.

As of Tuesday June 11th, 2PM, there is still not a single mention of a cause of death.

And just like during "the campaign" to install Hillary, Google did then and is now covering up search results, misdirecting.

Discovery, showing clearly how and WHY Google does this, would lead to charges of sedition and even treason, and the excuse of "just doing my job" is going to fly as well as a pig with lipstick!!!!

10 Political People have mysteriously died in the LAST 72 HOURS.....see list and links at the end.

He did work in Clinton's political campaigns.   He knew too much for sure.    It's a warning from Hillary....you start getting too close to me, and I will kill even my own brother.   Or it's a warning to HIllary, if you flip and implicate Hussein or others, you will be next.

Of course they won't kill Bill, HRC could give a shite about Bill, Huma much better in bed......

I posted this on a few sites and got the come back of:


No, it sends a powerful message.   Unless you had your head up your ass there are several objectives of the good guys.....

1) In order to restore the Constitution and Rule of Law to the USA there are about 50% of the populace that side with the left/libs/dems.     And they suck up any dis-info, and love any info that makes conservatives or esp. Orange man look bad.

But once Patriots are again in control and the evils that infest the CIA and other alphabet soup agencies are routed, if the country is filled with 50% people who believe that they were fucked out of their god given right to be ruled by the likes of Hillary, Schiff, Kamal-Toe, etc, then we will continue to have a real problem.    We will have civil unrest, and lead will fly, for a long time.

2) In order to avoid problem stated in 1), the proof against these fuckers needs to be so clear and so presented to the sheep, by those formerly as part of the clan, to be able to sway opinions.

3) The type of proof and the allegations of the wrong doing need to go far beyond just "she used a private server", which is all the left is thinking she did.    And I am amazed that the argument even stops there.....its not that she used a private server, it the reason she used it, and the shit that they concealed while using said private server.    The type of allegations needs to be enough to sway people, fucked up people who cannot analyse cause and effect, who think they hold the high moral ground because they are based in "feelings"

5) HRC and her handlers want to prevent the insiders from ratting each other out to get a good deal for themselves.    So they want to telegraph quite plainly, what the outcomes will be.....up to including not just only your death, but the death of your loved ones.

So fuck you, and your lame as fuck criticism. 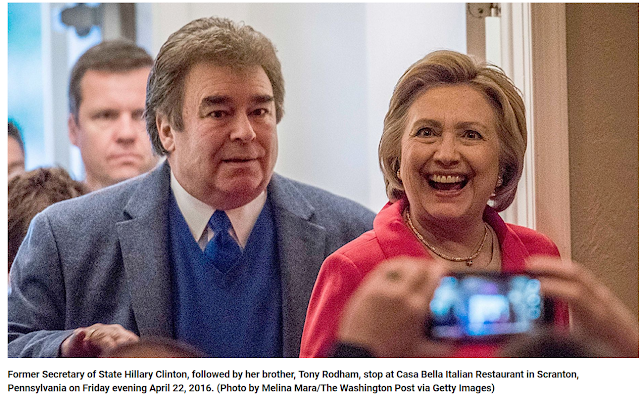 In 2000, as the Clinton administration was coming to a close, Rodham successfully lobbied his brother-in-law, the president, to override the objections of the Justice Department and pardon a Tennessee couple convicted of bank fraud, according to The New York Times.

A congressional investigation later found that Edgar Allen Gregory, Jr. and his wife, Vonna Jo, who were in the carnival business, had paid him almost $250,000 as a “consultant” in their bid to get a pardon.

In 2010, former President Bill Clinton helped Rodham, then short of cash, get a job raising investments in GreenTech Automotive, an electric car company then owned by Terry McAuliffe, an old Clinton friend and later governor of Virginia, the Times reported in 2015.
“I was complaining to my brother-in-law I didn’t have any money. And he asked McAuliffe to give me a job,” Rodham said at a court proceedings involving unpaid legal bills to his lawyer in a child support case, the newspaper said.

He also drew scrutiny as co-chairman of Haiti’s recovery commission, following the devastating 2010 earthquake, for allegedly seeking a multimillion dollar deal to rebuild homes in the ravaged country with funding from the Clinton Foundation.

In court proceedings in an unrelated lawsuit, Rodham explained how someone in Haiti had “donated” 10,000 acres of land to him. In court testimony, he said he had pressed Clinton for helping in breaking through red tape to get funding for the rebuilding project.

“I deal through the Clinton Foundation. That gets me in touch with the Haitian officials,” Rodham said, according to a transcript of his testimony, the Times reported. “I hound my brother-in-law, because it’s his fund that we’re going to get our money from. And he can’t do it until the Haitian government does it.”

In another venture, Rodham sought to export hazelnuts from the Republic of Georgia, where he was linked to a rival to then Georgian President Eduard Shevardnadze, a close Clinton ally. The incident prompted a National Security Council official to intervene to defuse a potential diplomatic embarrassment, according to The Washington Post.


Here’s the list of people who died within 72 hours of one another.
1)  Linda Collins-Smith – former Arkansas state senator – died of gunshot wounds, body wrapped in blanket.
https://townhall.com/tipsheet/bethbaumann/2019/06/09/something-is-fishy-here-two-former-gop-state-senators-found-dead-days-apart-n2547831

7) Lola Gulomova – Commerce Department US diplomat – died of several gunshots – her husband died also and they are saying it was a “murder suicide”.  Lola formerly worked for NASA and the World Bank
https://www.washingtonexaminer.com/news/always-smiling-us-diplomat-mourned-after-being-murdered-in-dc-murder-suicide

8)  Tony Rodham – Hillary Clinton’s Brother – cause of death not being released
https://www.cnn.com/2019/06/08/politics/hillary-clinton-brother-tony-rodham-dies/index.html

9) Herb Sandler – tied to Pizzagate and the Podesta emails!
https://www.reddit.com/r/The_Donald/comments/5ujhxh/hi_my_name_is_herbert_sandler_of_the_sandler/