The joke of the matter is that we are "fighting carbon", one step removed from calling it,its real name CO2.

We knew for a decade or more that the Globalists that want to control you and take your money to fight carbon, and the nukists are all in the same club....the big secretive project club, the economic hit men.

CO2 follows temperature. Not the other way around. Proven fact.

Sure, reduce pollution, and force pollution control on coal while phasing out coal over a rational period of time.

I love how the nukists and the other Globalists (Socialists) use the same memes.....it's different this time because of computers. As if human error itself isn't a large enough damning statement against anything nuclear. Same with the recent lies from the Globalist rag piece, the New York Times that is promoting

How quaint, by adding in a few words, we can now embrace the System that has killed hundreds of millions. Note to all --- kind of like Nuclear, and don't forget the morbidity. 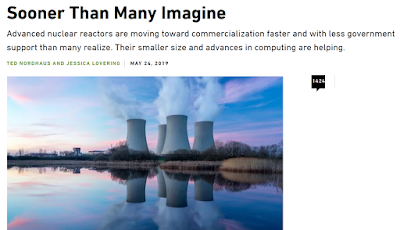 And the Nukist doubled down on the CO2 lies

And Bernie Sanders Triples down on the insanity of putting a different word in front Socialism and somehow, magically, changing the nature of the beast.

How refreshing to find a comment board where people all seem to know what they are talking about. Add to that: efficiency programs operated by utilities, wind on a 2 - 4 MW turbine in groups of 50 MW's or more, and utility scale solar (25 MW's or more) are setting new low price records everywhere in the world. Efficiency below 1.6 cents per KWh.

The cheapest wind contract so far is 1.5 cents per KWh.
The cheapest solar I've heard of is 2.2 cents but I think there are some cheaper ones.

The Southern Company (mentioned in the article) is building Vogtle, the last nuclear reactor I expect to see ever built in the U.S. which is well over 18 cents per KWh, and pushing much higher. Lazard is going to have to raise their annual assessment of the cost of nuclear power because of this one plant.

Storage is not needed until we get about 80% of our power from wind and solar and we want to eliminate the last 20% of fossil generation from existing natural gas (20% of total power, maybe 60% of current natural gas). It is already cheap enough to combine with wind and solar, but by the time we need it it will be cheaper.

There are about five major technologies competing for economic leadership in storage. I won't place bets, but I like using above-peak-demand electricity to produce hydrogen to be stored in existing natural gas facilities and used in existing combined cycle plants. Even if they can't keep leakage to a minimum it will be cheaper than today's supply.

Efficiency is too cheap to meter. Nuclear power was a pretender. Nordhaus should go away until he learns something about utility economics.
Posted by Stock at 11:43 AM