Jordon Peterson - ??? An Operative to Prevent the Right From Destroying The Fakeness of the Neo-Left 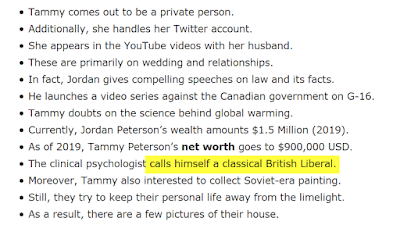 If you are not familiar with Jordon Peterson, you should be.    He popped up out of the woodwork
around 2 years ago.   He and his wife apparently have some autoimmune disorder, and they have adopted not just an all meat diet, but its an all beef diet.

His wife Tammy apparently had some large medical problem a few weeks back, and we wish her the best, and are worried a bit since there has been no news since then.

His daughter is also trying to be an internet sensation.     She talks about her real life and health 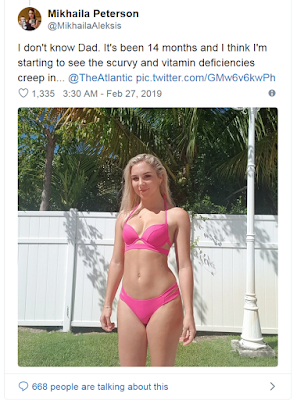 problems at a young age, and that morphine makes her cry.....


A quote from Jordon Peterson, perhaps exposing his "agenda"

"I think that the continual careless pushing of people by left wing radicals is dangerously waking up the right wing. So you can consider this a prophecy from me if you want. Inside the collective is a beast... I'm afraid that this continual pushing by radical left wingers is going to wake up the beast."

Rhetorical question.....what if liberalism pretty much disappeared, and we had a country of almost all conservatives, or if not conservative, just sheep who didn't really believe in anything?

We need a game plan for the post declass era. Amazingly, he and his wife and daughter have an "all beef" diet, plus salt and water. The daughter tries to be an internet sensation too.

I like her recreational bonus of sparkling water and bourbon.