Trump Cancel Contract for Fetal Tissue, and OK Makes Law to Prevent Fetal Tissue From Being Used in Food Products.


Prentice is also an adjunct professor of molecular genetics at the John Paul II Institute at The Catholic University of America and an advisory board member for the Midwest Stem Cell Therapy Center.
“We won’t be missing anything,” Prentice told TheDCNF. “We’ll be doing better by doing ethical research — it’s better science to use something that’s not fetal tissue.”

Seriously folks....this is where we are.     The oceans are dying, our agriculture has not prepared
themselves to handle variable weather and so land based food is going to go way up in cost.

And we have to pass laws to prevent aborted baby parts from being used in human food.

The above link is from NPR of all places. 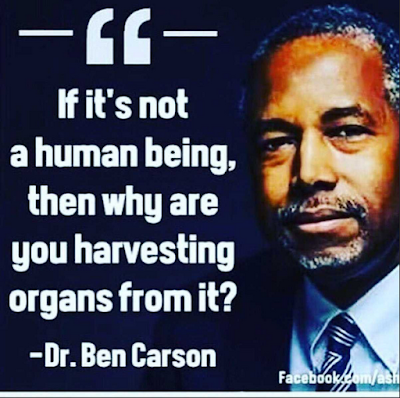 My spidey sense makes me think that NPR is producing some stories that Trump will like so that
NPR doesn't get ALL their funding cut.

Meanwhile, Satanic Myle Cirrus stages a walk through a crowd in which paid stooges "attack her" repetaedly with only husband in attendance.    But Zuckerberg spends $20M a year, on security.

Zuckerberg spends $55,000 per day on his personal security.   But Cirrus relies only on her husband, LOL.   Sure I will buy that.

To be fair and balanced, this other site quotes someone saying that fetal tissue has led to lifesaving

advances, submitted without any evidence or even explanation, though. 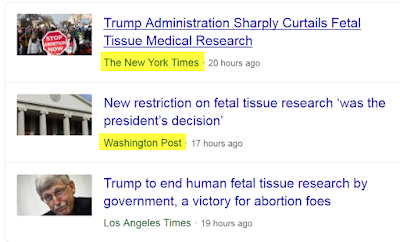 Of course, the enemies of the people GG, NYT, WP immediately start a narrative.    GG pushing the
other evil to the top of the search.

Trump did nothing to prevent fetal tissue research, he just stopped Federal government funding of it. 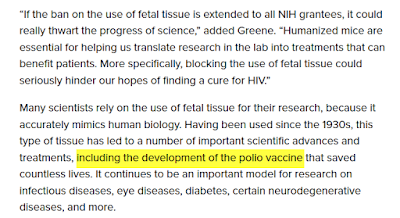 WHY IS FETAL TISSUE SO "SPECIAL"?

The Polio vaccine is the only specific example, and its from 80 years ago.

The heart of the matter is "Stem Cells" and one step further, is "Embryonic Stem Cells"


Stem cells have the capacity to create other cells in the body, such as brain, muscle, tissue and blood cells. This is why it is considered a revolutionary option to repair or replace damaged cells or tissues, as in the case of cancer. Stem cells are present in all of our bodies and for the entirety of our existence. But its potency is higher in a fetus than in an adult body, resulting in fetal stem cell research.

So it is partly a matter of convenience.   It is just easier.

Although I support Abortion under certain restrictions, the next concept is beyond "uncomfortable", I didn't know they were actually doing this.....

They are playing God, creating a Embyro from a human egg , just so they have an "Embryo" that they can then dissemble to get the goods.

I enjoy playing devil's advocate with anti-life people. Just to watch them get uncomfortable.
Two arguments:

"Margaret Sanger is my personal hero. No one else had the vision she did for minimizing the black crime problem in the US. Just think about it: In NYC, planned parenthood organizations kill 1/2 of the black children. Amazing. Just think of all the tax money that saves. ... Sure sure, we aren't supposed to talk about how plan parenthood was founded to kill blacks. But, we all know it's true don't we? ... There is a reason they build most abortion clinics in the black (and Hispanic) neighborhoods and not in the white suburbs."

"China is really a forward thinking country. They do an ultrasound and then abort if it's a girl. Or, if they are too poor for an ultrasound, they deliver the baby and break the baby's neck if it lacks a penis. They recognize they need workers but recognize that the population needs to be under control. Only way to do that is to kill off a significant portion of the girls. Really progressive thinking."