Epstein Quick Thoughts, and The Queen Is Handing Over Power

WOW NBC with a video interview of 14YO groomed by Epstein and his female co-conspirators.

adding to the narrative....

I reported on this last year, the narrative of females having sex with underaged boys, funny how that became a "thing".    Cute teacher gets 20 years....wonder what Epstein will get

I thought the timing was curious, The Queen is openly handing over power

Prince Andrew was pretty much convicted of having Epstein arranging for sex with an underaged girl, and the Queen worked hard to cover it up.

The Epstein Epi-center will shift with narratives. 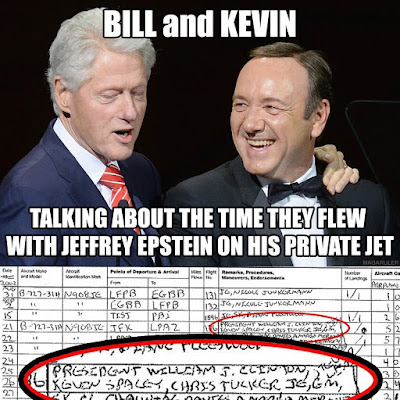 So blatant, the Jew controlled media immediately starts to "tie Trump to Epstein" when the opposite
is true.

Epstein walked free for so long because he was also a tool of the CIA and FBI.   By enticing celebs and pols into riskier and riskier situations, and of course documenting those with witnesses and video.....

Now it looks like  Kevin Spacey has bribed his accuser, and for a first time in history the accuser "takes the Fifth", the right not to self incriminate, that he destroyed evidence against Spacey.

However, this evidence included texts that were sent to the accusers girlfirend and up to 7 other friends.   So in other words, the evidence is still clearly on those phones, and of course available at the service provider and the NSA.    Why let Spacey off that easy, unless you get him to rat out some others like Epstein?    Why is the judge allowing this to happen, why is the prosecution allowing this to happen.

Why indeed.  The corruption runs deep.

Epstein and Spacey also were buddies.
“Equally troubling are Epstein's long-cultivated relationships within Hollywood and New York media circles, where he moved with ease well after his high-profile 2008 conviction for soliciting prostitution from girls as young as 14,” THR’s Tatiana Siegel and Marisa Guthrie wrote.
The report says that Epstein has been escorted to A-list events by “New York society doyenne” Peggy Siegal, “traveled behind the velvet rope with ease” and hung out with stars including Chris Tucker and Kevin Spacey.
The Hollywood Reporter said Epstein “frequently attended industry events” despite the #MeToo movement bringing down other once-powerful men.
“Amid a climate where figures including Harvey Weinstein and CBS' Leslie Moonves had instantly become persona non grata for alleged misconduct, Epstein had been convicted and still enjoyed film-world access,” Siegel and Guthrie wrote.


The flood gates have opened and the Hollywood scandals are pouring out. It seems there are no safe avenues in the arena as Nickelodeon producer Dan Schneider is the next one to be outed by victims of rape and sexual assault over decades. Schneider is responsible for shows like iCarly, Drake and Josh, Zoey 101, and dozens more, prompting Nickelodeon execs to slap him on the wrist and pay for attorneys to cover up the behavior over the years.

https://celebrityinsider.org/some-question-abcs-and-disneys-willingness-to-work-with-registered-sex-offenders-and-pedophiles-after-immediately-canceling-roseanne-152501/
We need to start a fucking list. Brain Peck was convicted and hired back by Disney and still given access to kids.