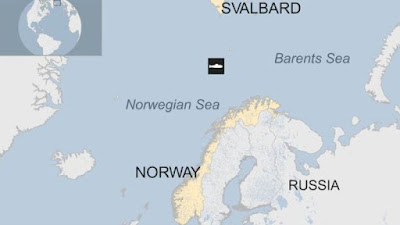 stock here
At first they didnt think they would find much in the way of radiation, but obviously something rusted away or moved and is releasing massive radiation now.

In light of the speculations over the avoidance of a “planetary catastrophe” last week by a Russian submarine that caught fire and killed 14 Russian Navy seamen, a report is out that document that a sunken Soviet-era submarine that has been at the bottom of the Arctic for 30 years is leaking radiation into the ocean in excess of 100,000 times.  What’s worse is that reading is higher than those taken just twelve years ago.

The report comes from a report from Norwegian news outlet TV2 from researchers in Norway who discovered the findings.

Uranium toxicity and high rates of obesity and diabetes in Kuwait